Notch Point is touted as being the best free camp in Qld. Is this true or is it just hype and over rated. What did we think? Do we agree it’s the best, one of the best or yeah nah?

Comments in WikiCamps like “stunning outlook” “Cracker of a spot” “Great free camp” “Amazing, highly recommend” “Overrated”  “Beautiful mountain views and colour of the water” ‘best camp spot so far” “Absolutely stunning spot” wow who wouldn’t want to go and camp for free here. So do we agree with the majority of comments that it is the best free camp in Qld? 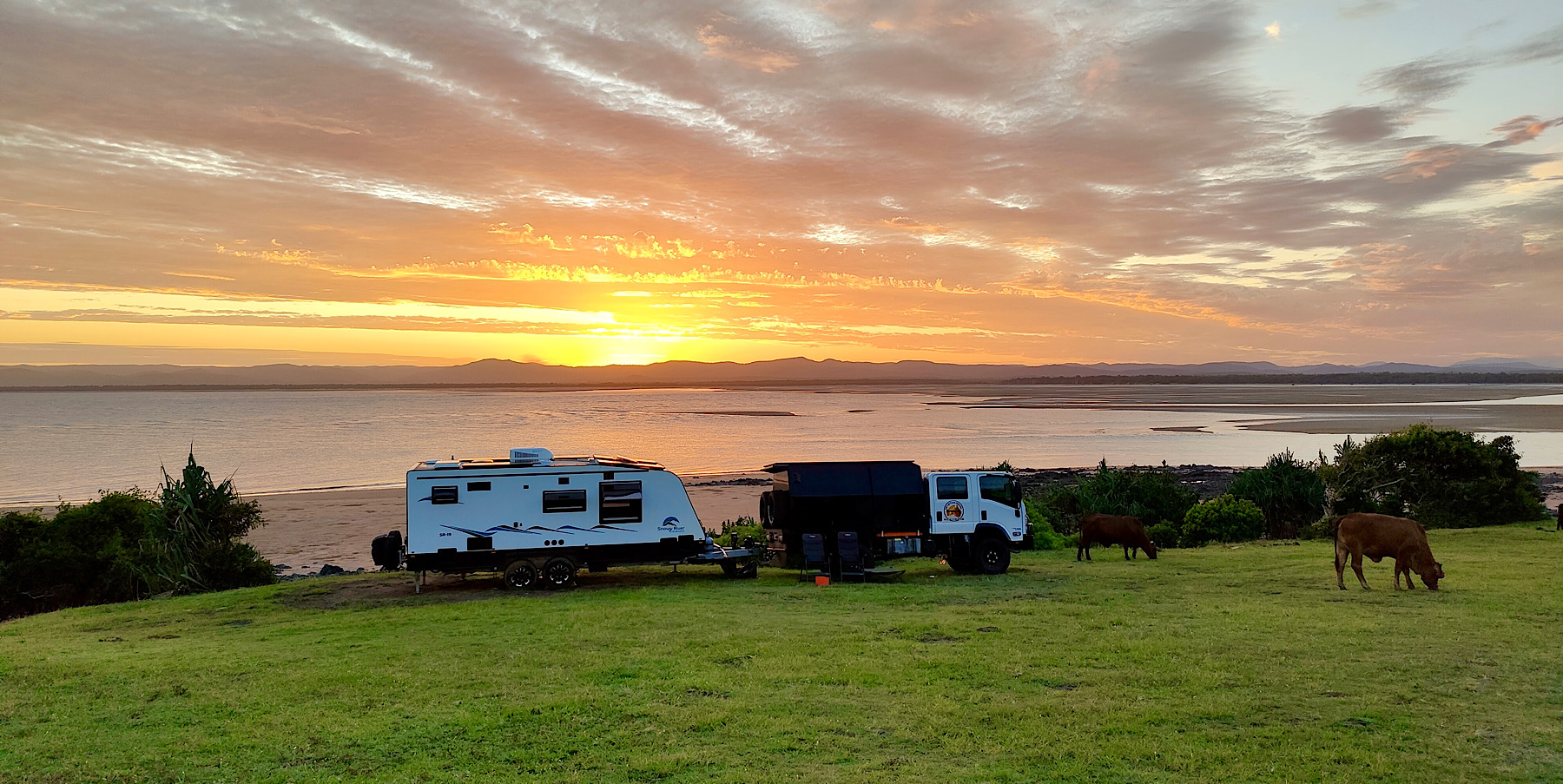 Well yeah it’s pretty darn good. The best free camp mmm we might not go that far but it is certainly up there with the best. If you are a beach person then you will love it. The views are indeed stunning. Watching the tides go in and out is incredible, it brings with it a total different outlook with each high or low tide. 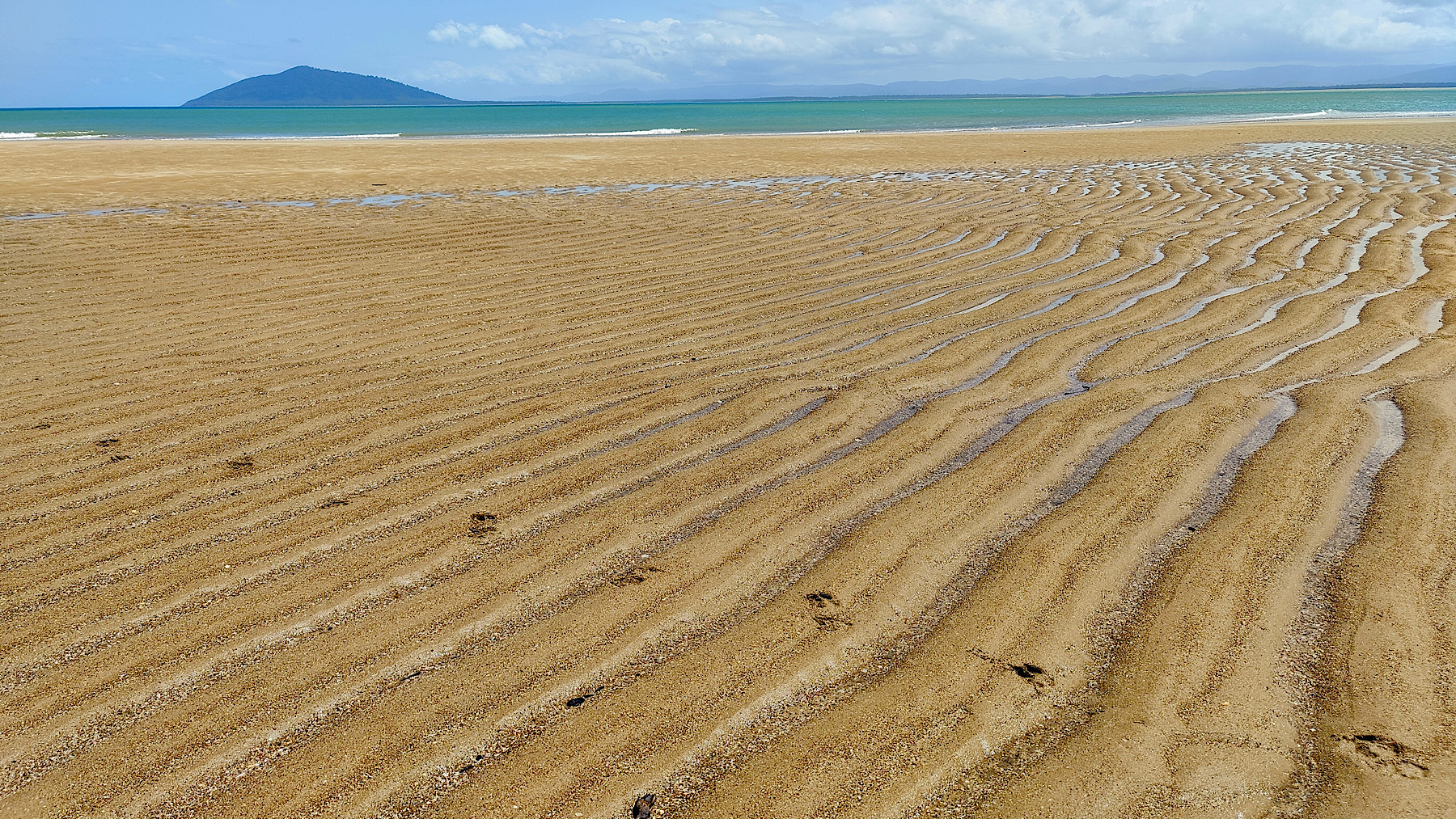 At high tide the water comes back in covering the rocks and sand flats up to and surround the mangroves. Beautiful turquoise water. 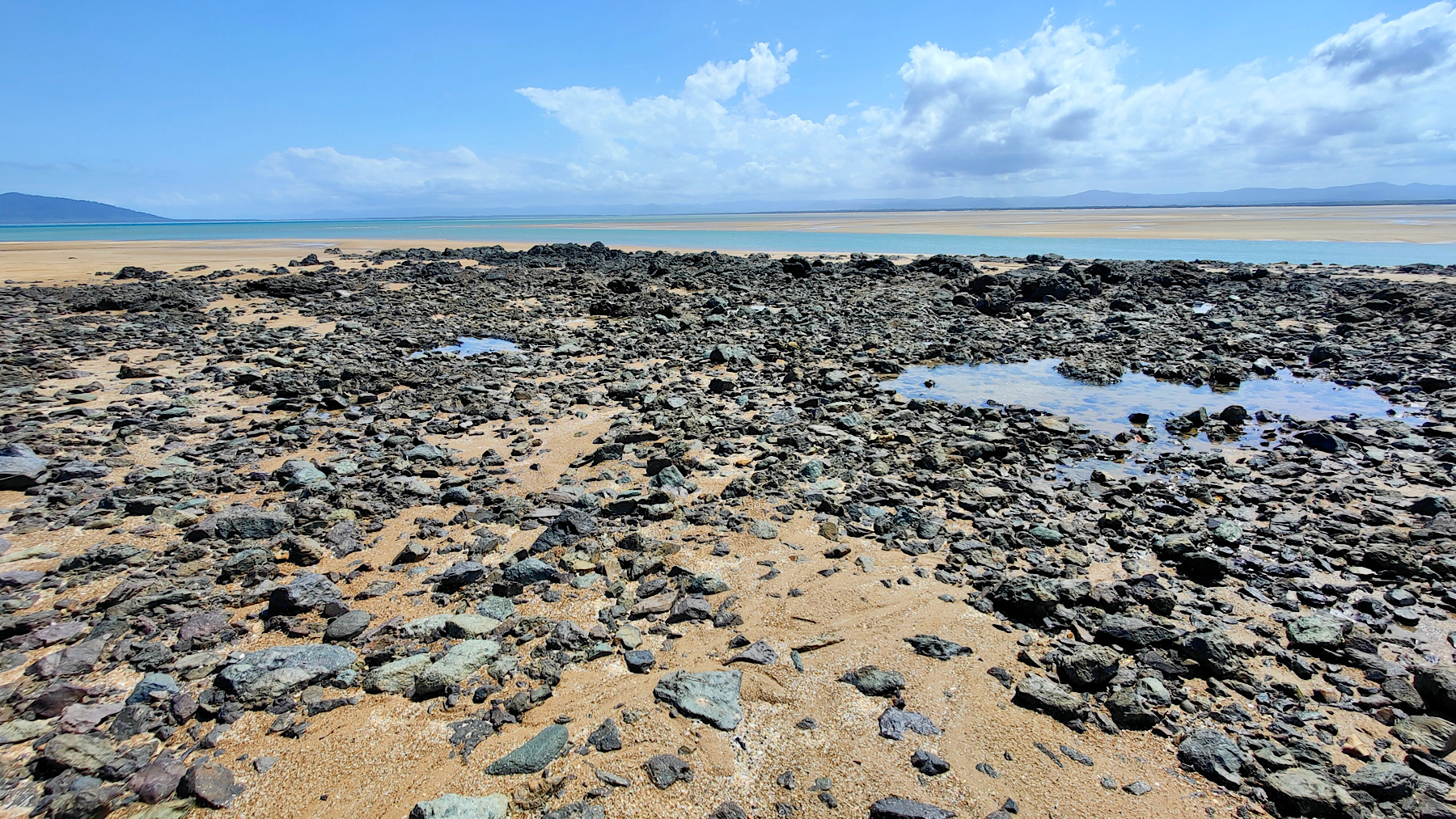 The ground is not that level, some is very slopey indeed, but there are also some flat spots particularly around the Eastern side but have to say the Western side has the best views, which is where we were up the hill in like the primo spot. 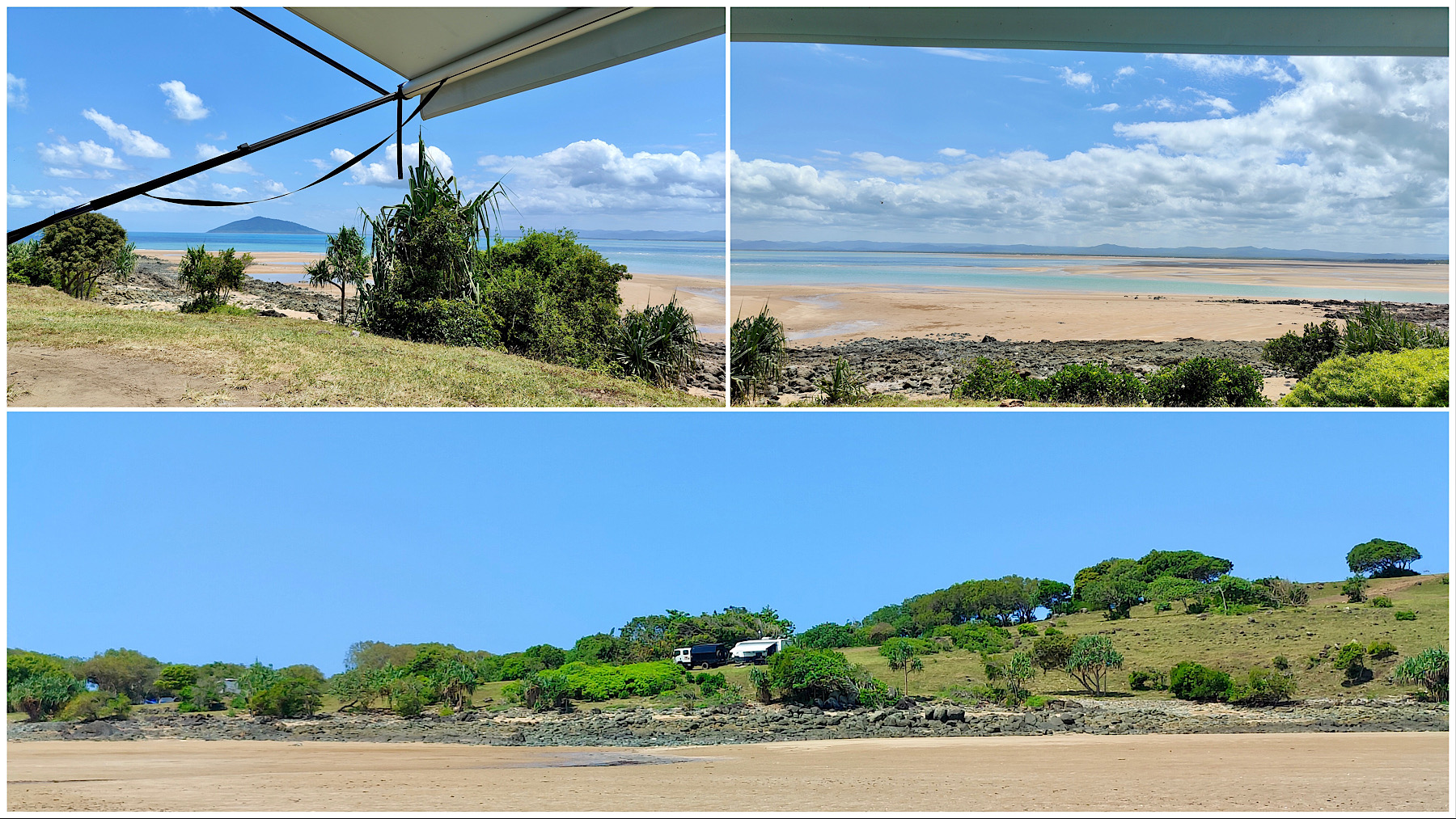 You are vey much subject to the weather here, we had several storms and depending one which way the winds are blowing and which side of the point you are camped you can get hammered with winds. 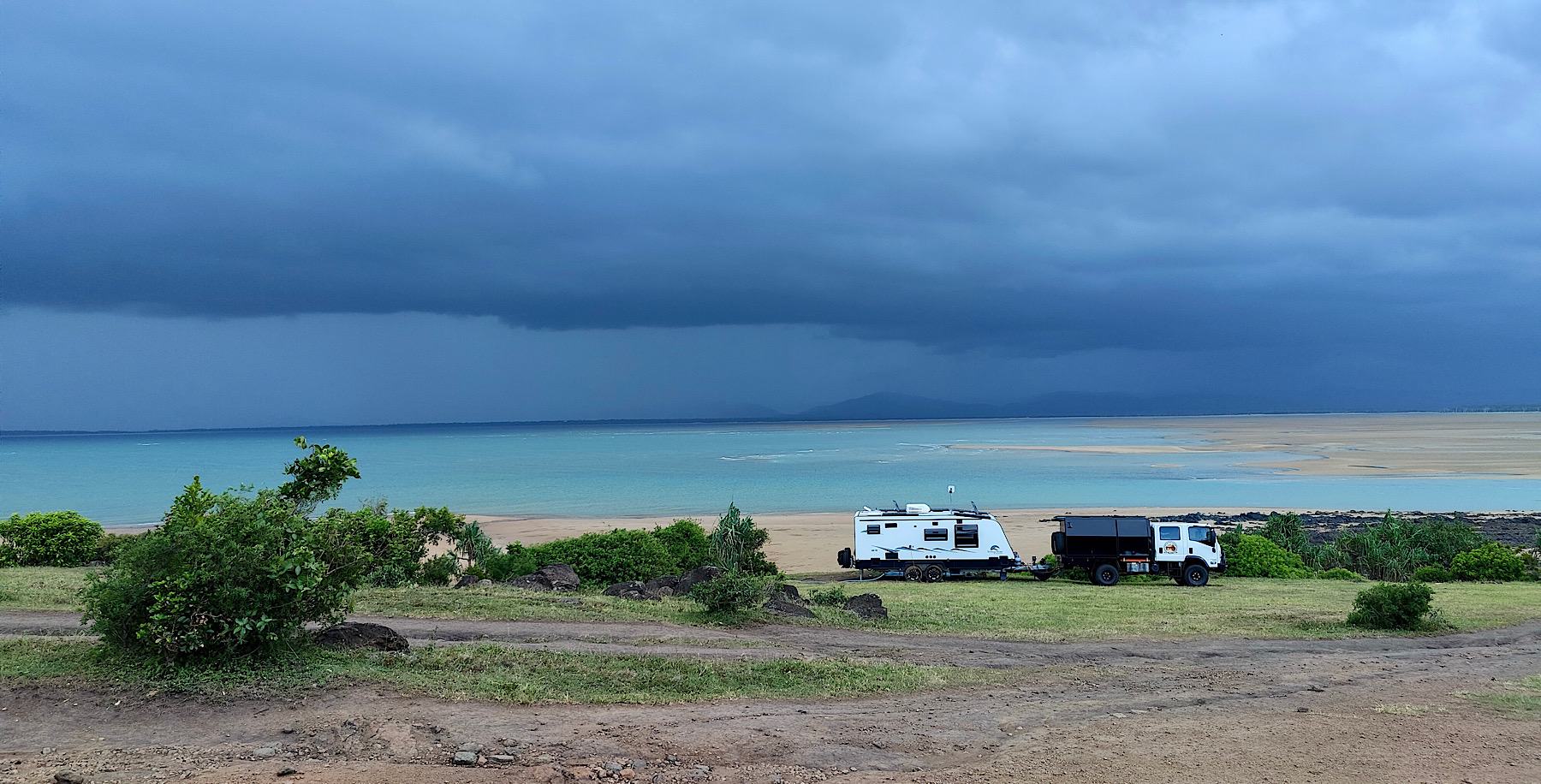 There are loads of cows leaving their deposits, lots of people coming and going most doing the right thing but there are always those that don’t respect the awesome free camp. 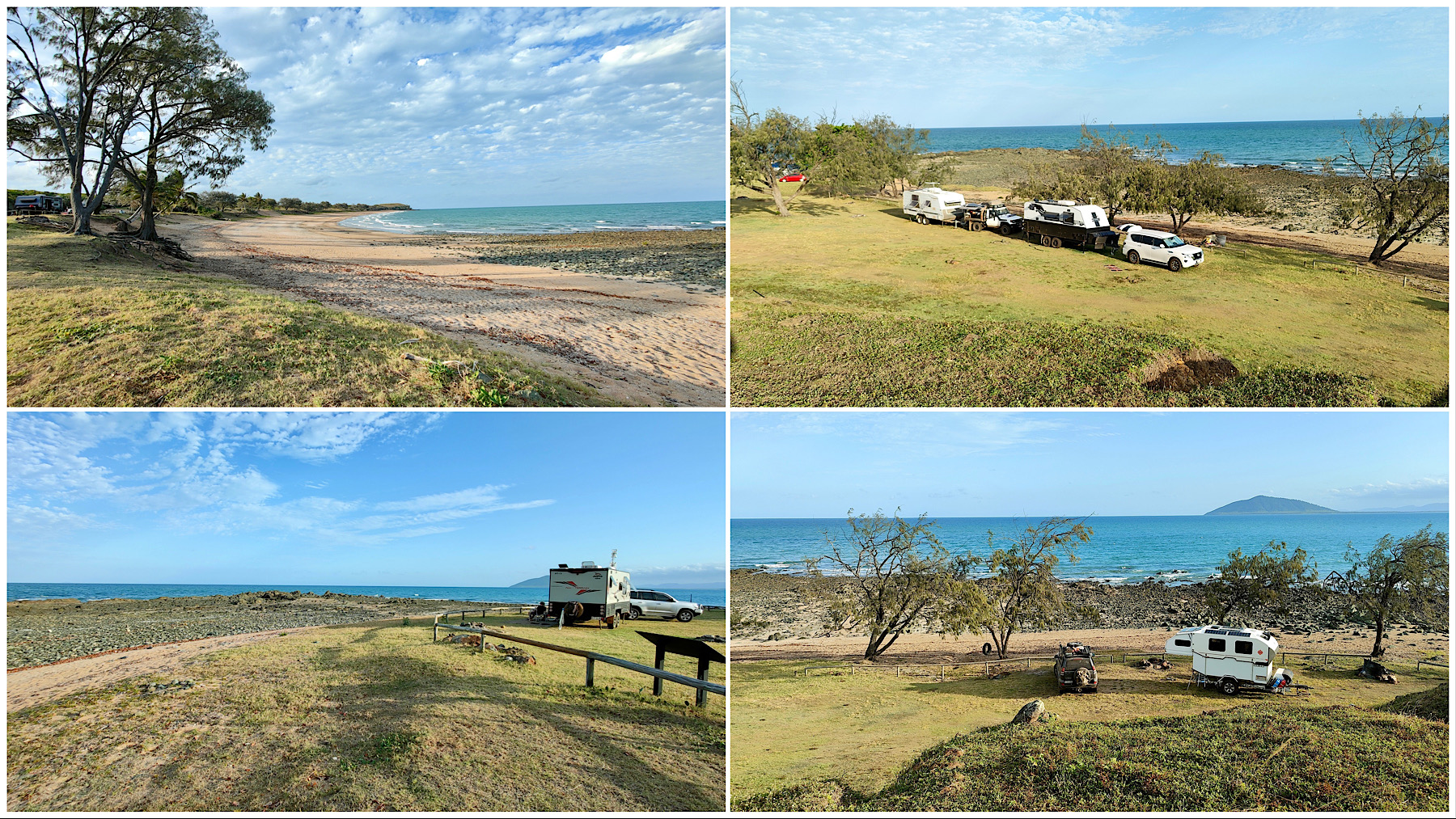 One thing we found a little frustrating in the heat was you can’t swim in the water, due to possible crocs and stingers in the warmer months. And when it’s so hot and humid you really want to go for a dip in the beautiful blue water calling you in.

You can camp here for 7 days for free. There are no facilities at all, a bin is at the gate coming in, so it’s bring everything in with you and take all your rubbish out. Despite the number of fires remnants on the ground, there is a sign at the gate stating no open fires, go figure. It is very popular and we were surprised at the number of campers coming and going this time of year. 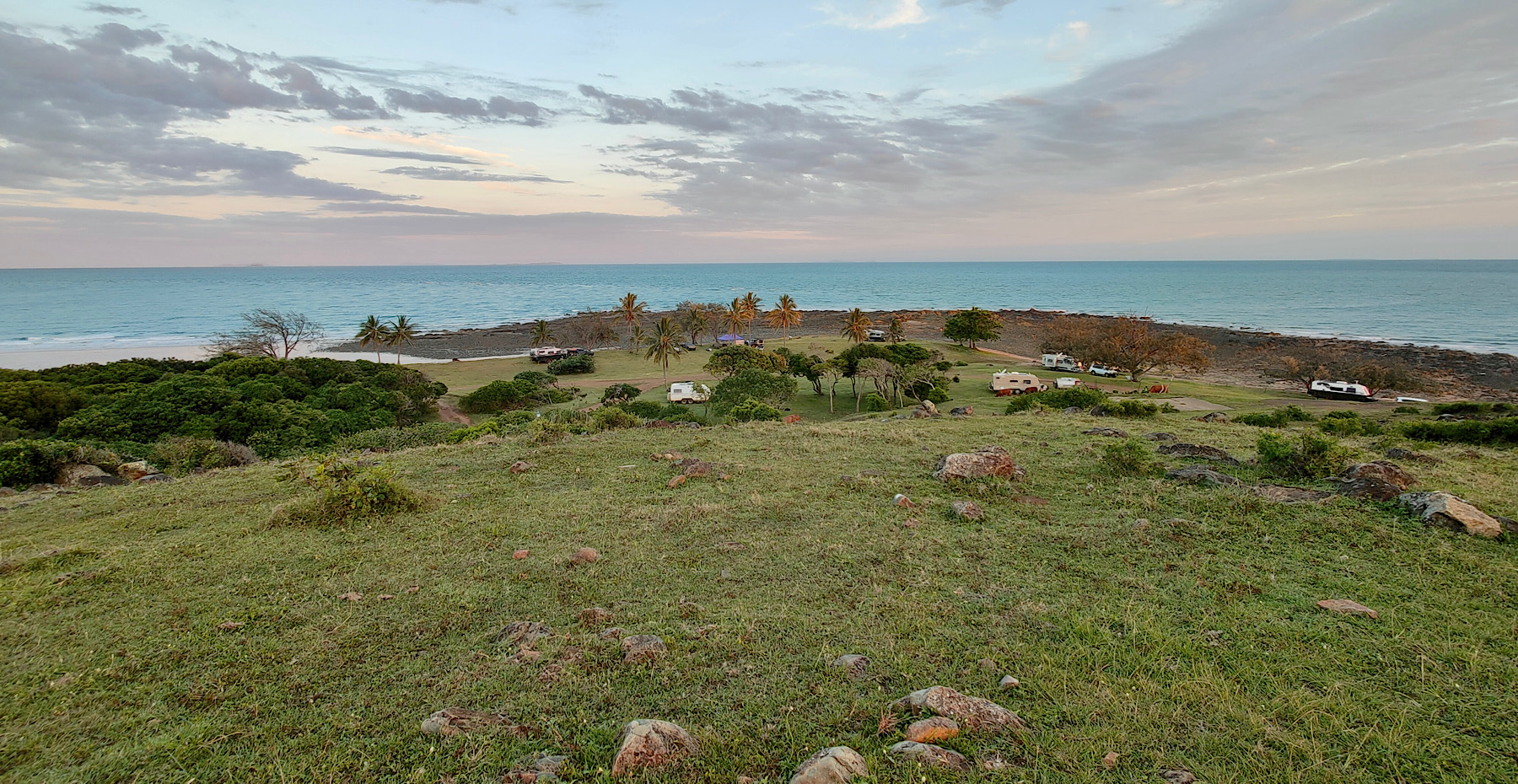 We didn’t have any issues getting in with the truck. Chris just went slow and steady, mindful of any low branches or narrow track. There are lots of tracks if one isn’t suitable.  It was easier getting in than we thought it would be.

When we have been mentioned stingers in these tropical waters, there are box jelly fish and The Irukandji jellyfish is a small, extremely venomous species of box jellyfish approximately two centimetres in diameter, making it difficult for swimmers to notice in the water. Irukandji jellyfish are most likely found in tropical Australian waters, from Bundaberg in Queensland to Geraldton in Western Australia, from November to May, though incidents of Irukandji Syndrome in Far North Queensland have been recorded for all months of the year.

Unlike most jellyfish, which have stingers only on their tentacles, the Irukandji also has stingers on its bell. Biologists have yet to discover the function of this unique characteristic. The hypothesis is that the feature helps the jellyfish catch its prey of small fish. Irukandji jellyfish have the ability to fire stingers from the tips of their tentacles and inject venom.

Irukandji jellyfish’s stings are so severe they can cause fatal brain hemorrhages and on average send 50-100 people to the hospital annually.

The sting has been described as “100 times as potent as that of a cobra and 1,000 times stronger than a tarantula’s”

Mmmm you can see why it is wise to avoid swimming in areas known for stingers.