Aramac is one of the oldest towns in the central west. Originally known as Marathon, it was later renamed after Robert Ramsey Mackenzie, the first explorer to the area who carved his name (R R Mac) on a tree that was later discovered by explorer William Landsborough and the name Aramac was born.

It was once the biggest wool producer in Australia but it is the local cattle industry that has made it famous. The Infamous Harry Redford (Captain Starlight) was a drover who stole cattle from Aramac including a white bull. He was later caught and stood trial in Roma, the white bull was even brought into court as evidence, he was found innocent. Information taken from a Barcaldine Tourist brochure.

There are several attractions in town in recognition of Captain Starlights influence in the area. Including at statue of the big White Bull.

There are “Adorabulls” A herd of white bulls to recognise the exploits of Harry Redford. There are 8 little adorabulls in 8 prominent locations around town. 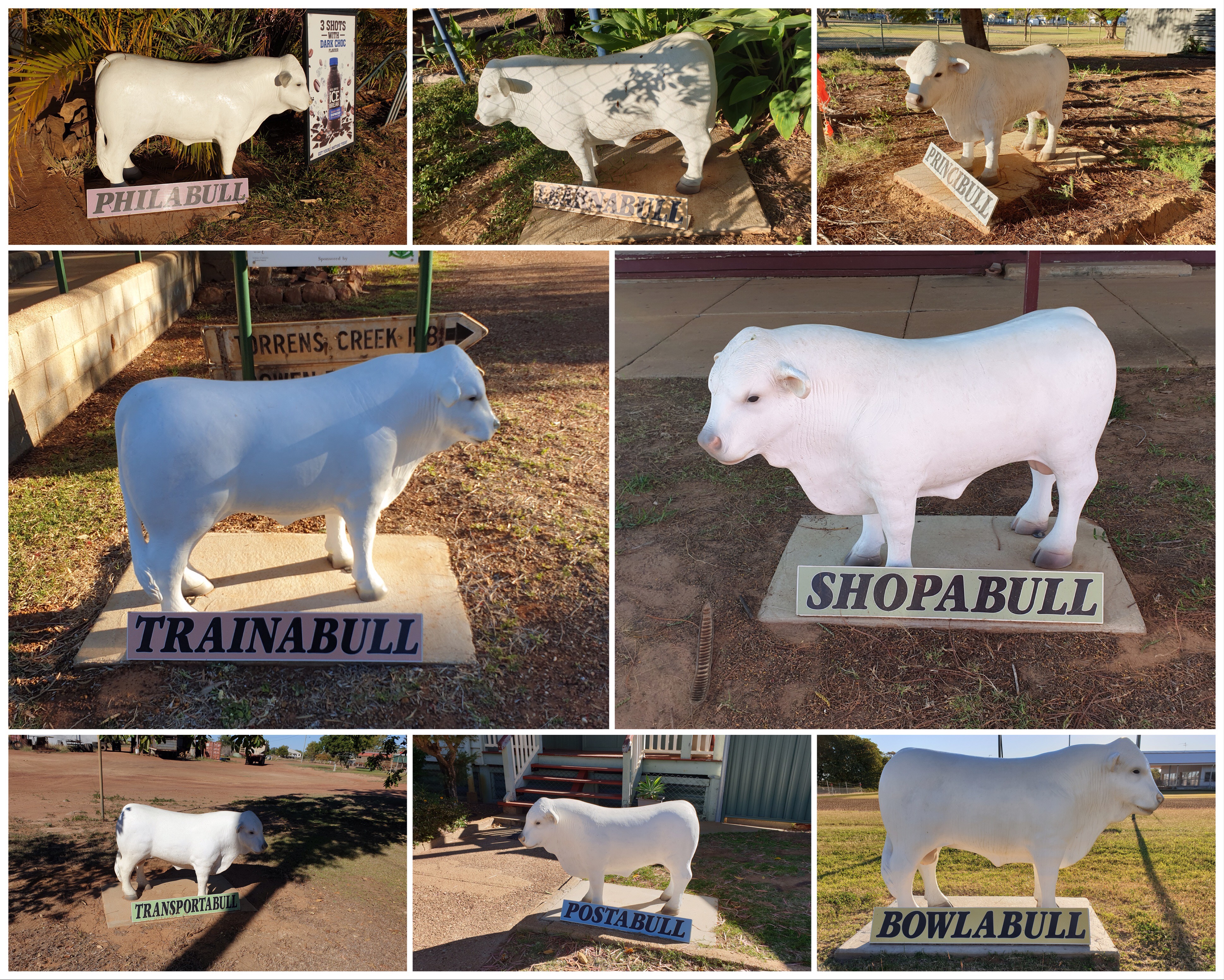 One of the main reasons we took the detour up to Aramac was to do the Lake Dunn Sculpture Trail. Local Artist Milynda Rogers decided she needed a platform to display her work and has created at least 35 metal sculptures along approximately 200kms of road much of it dirt. The result is one of the biggest permanent, outdoor sculpture exhibitions in the world. 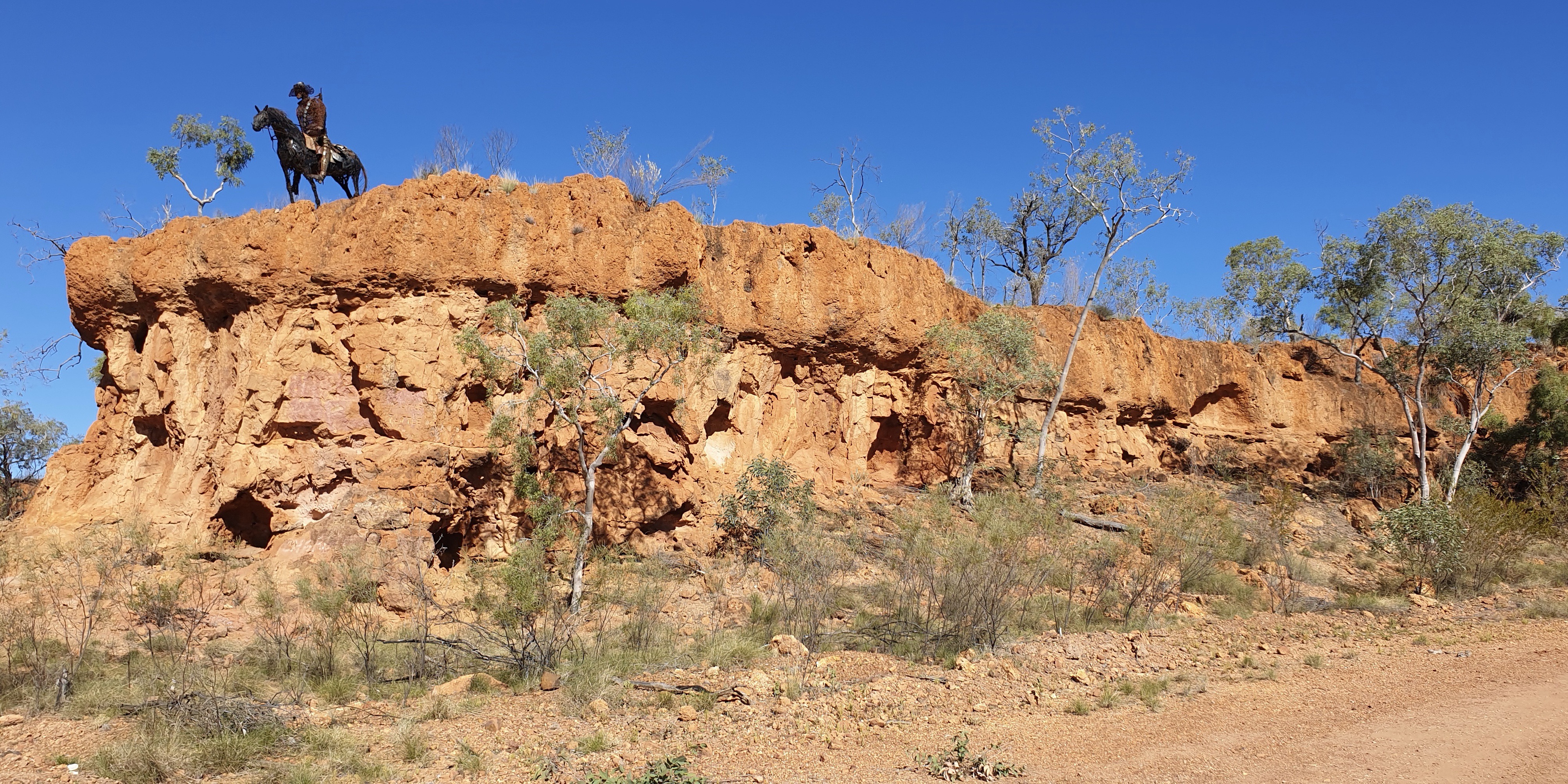 Wow wow wow, it is well worth the detour into Aramac and staying in this area a few days. 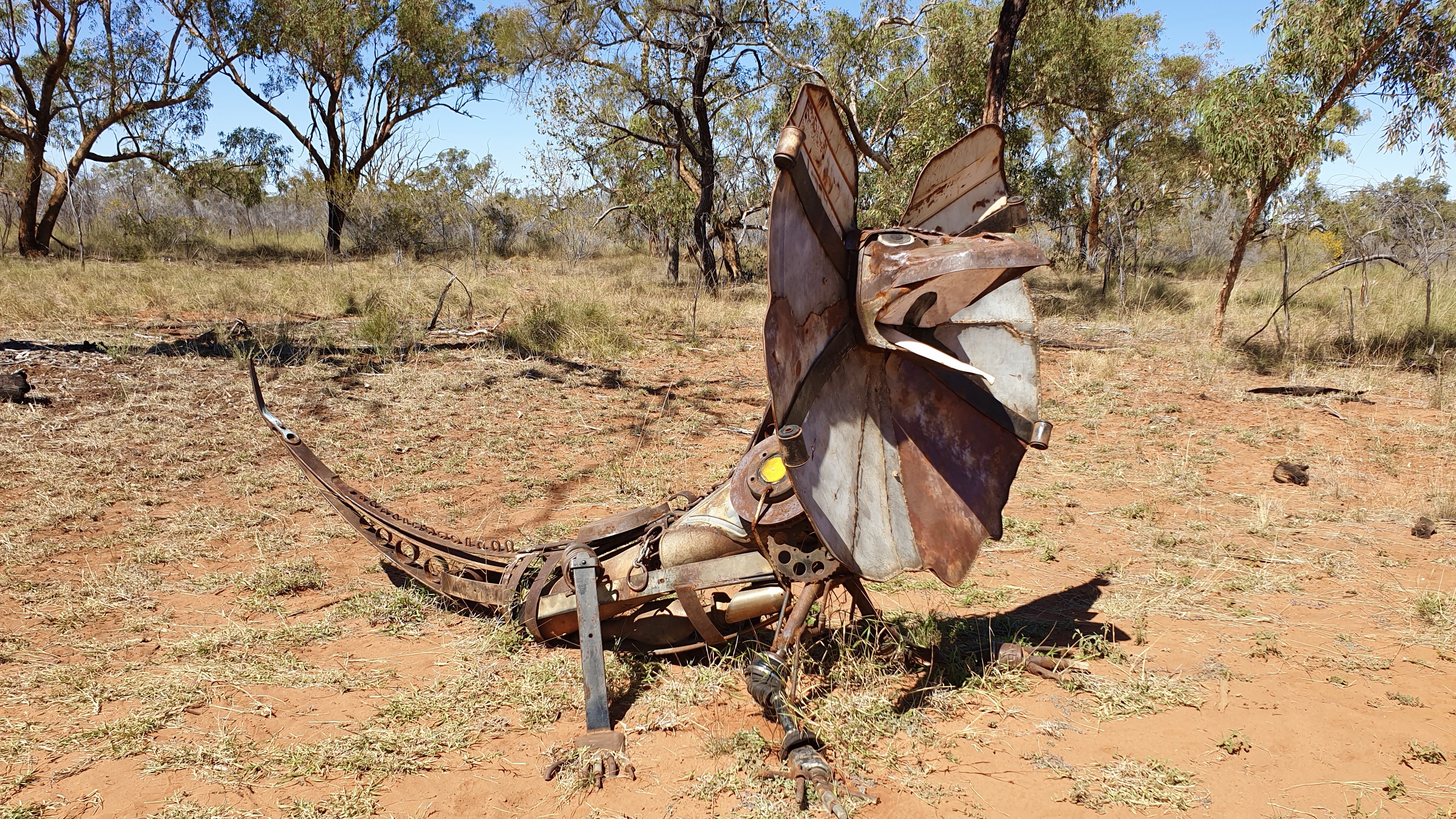 If you have the time the council run camping area at the Showgrounds costs $15 a night but pay for 2 and stay 5. We were able to leave the van at the Showgrounds for free after asking at the tourist info. Turns out the road would have been suitable to take the van, 2 thirds of it is a good dirt road but we figured it would be quicker and cheaper on fuel to leave it behind anyway.

Jess wasn’t too sure when she saw one of the first ones which was a big ram, she was growling at it, after that she just checked them all out and gave them all a big sniff. 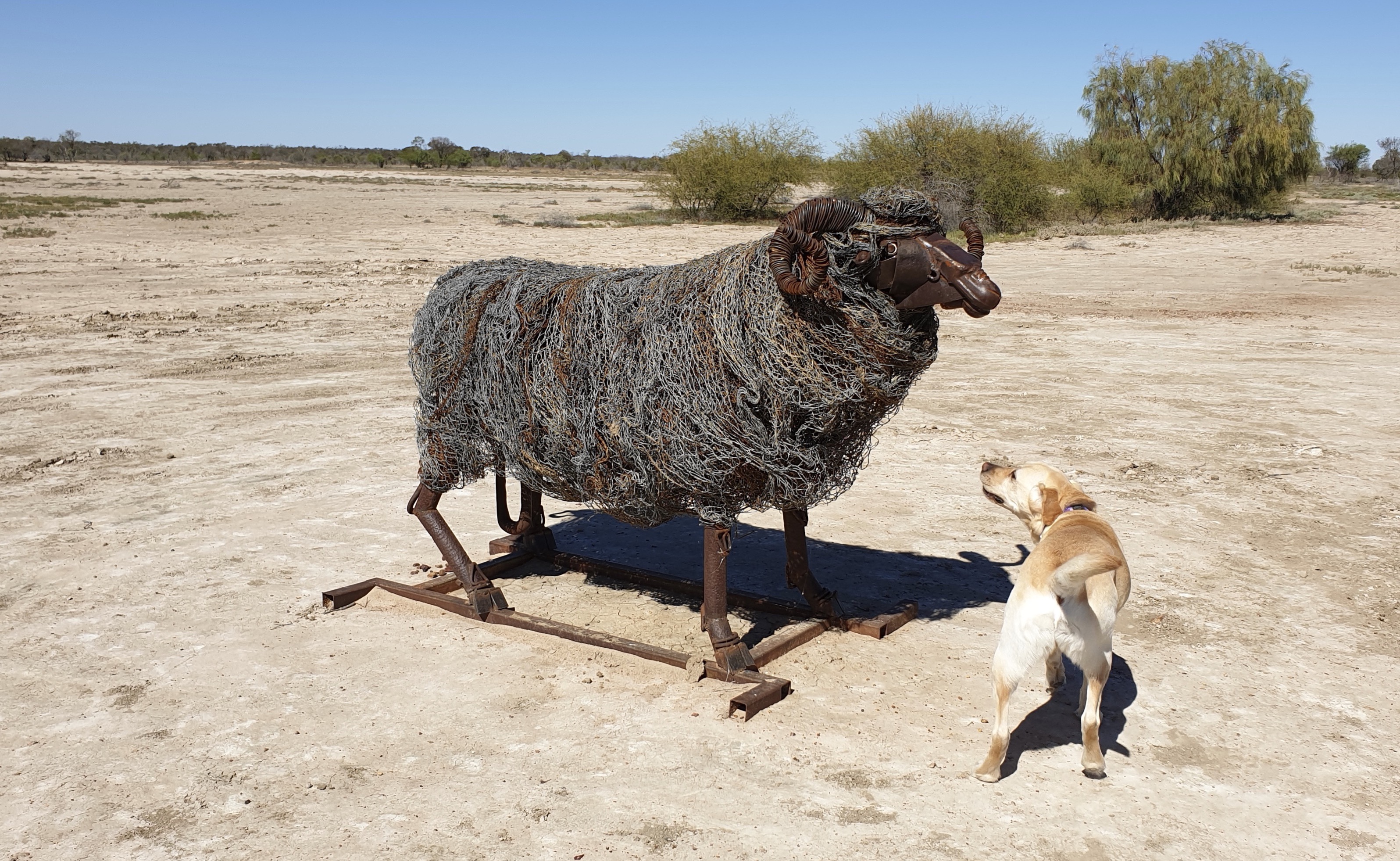 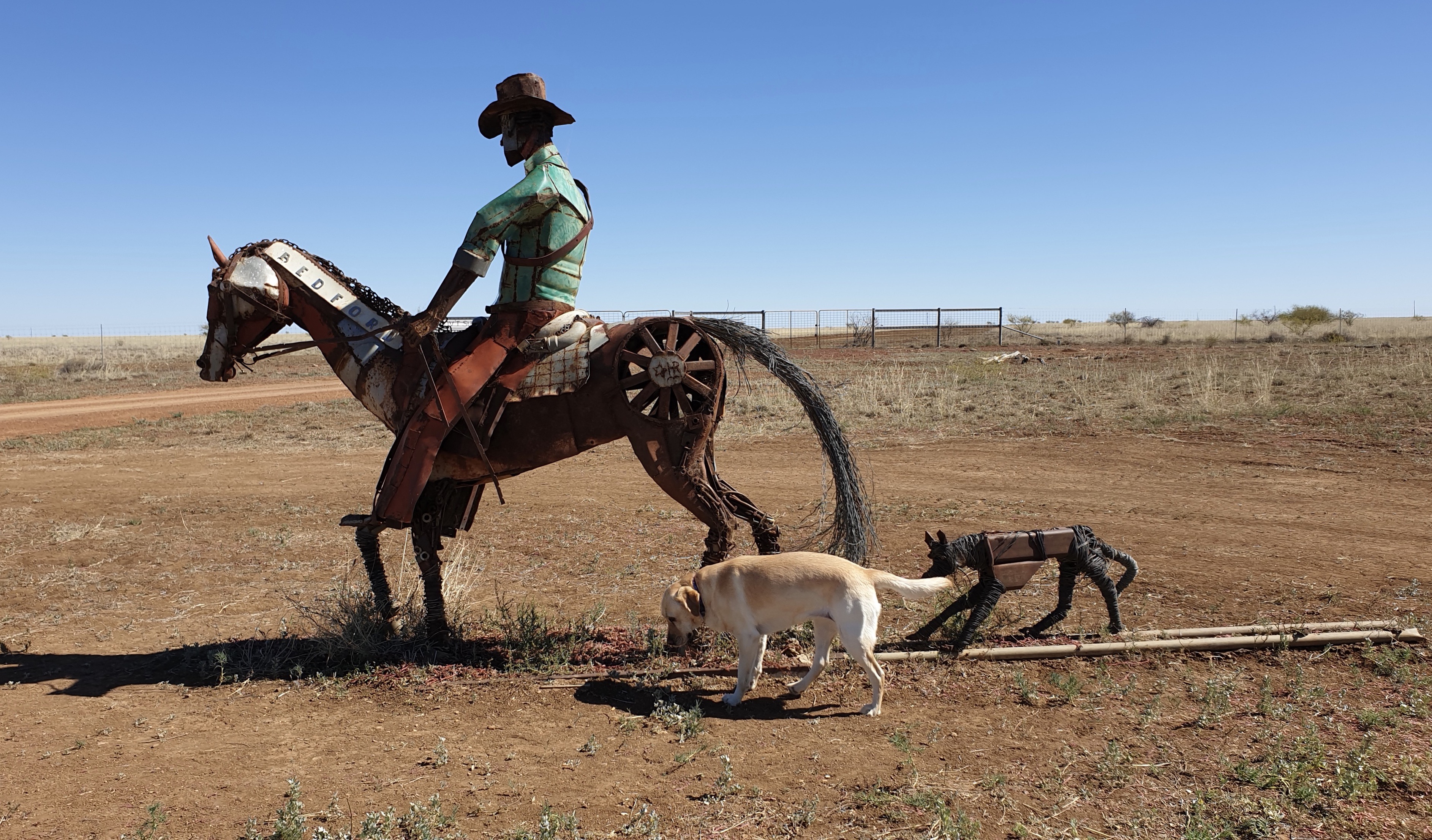 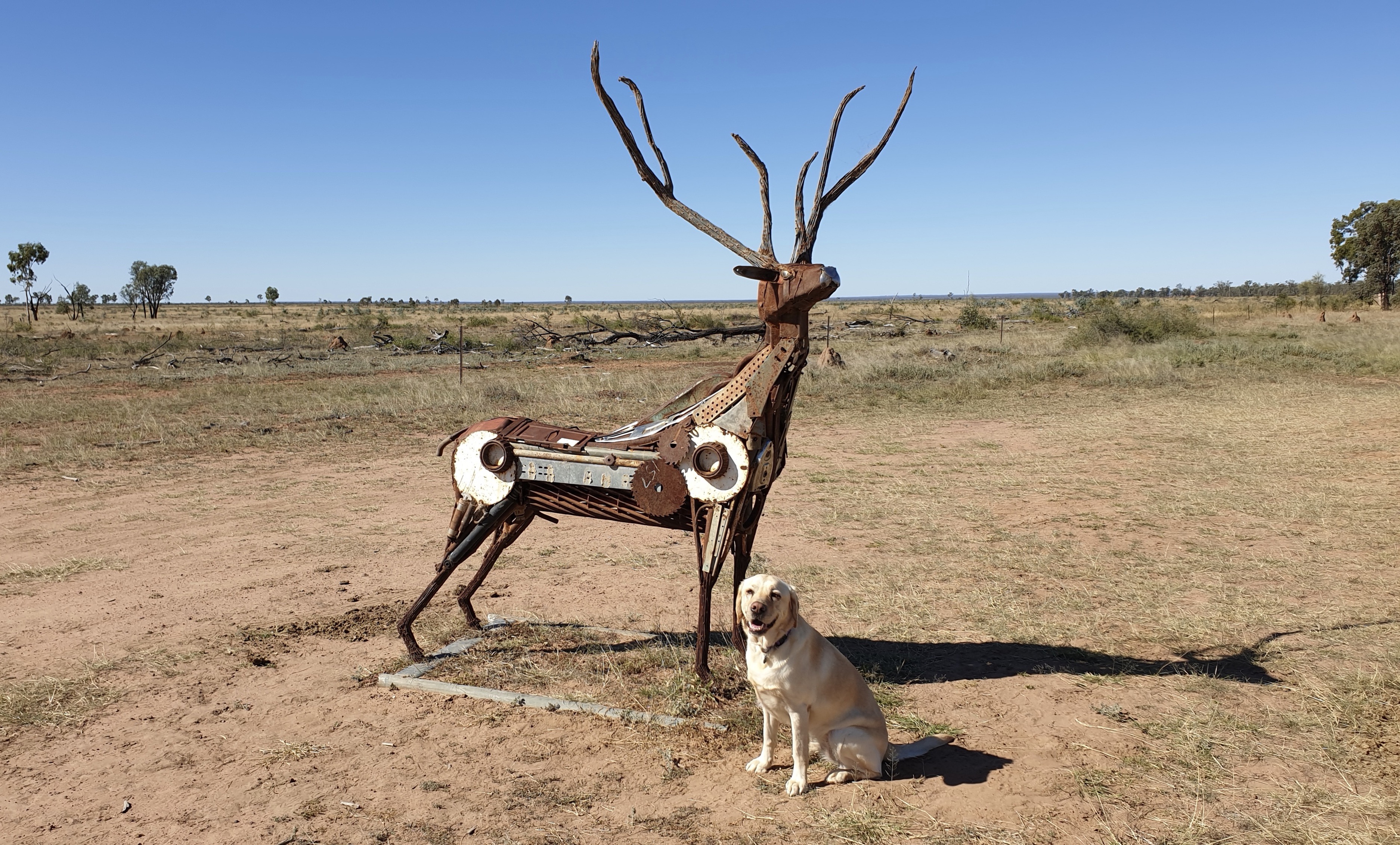 The sculpture tour is well worth setting aside a day or two to do, we stopped at every sculpture and took photos. This artist is one talented lady, to come up with these amazing ideas and concepts and then to create the work of art she has imagined in her mind. 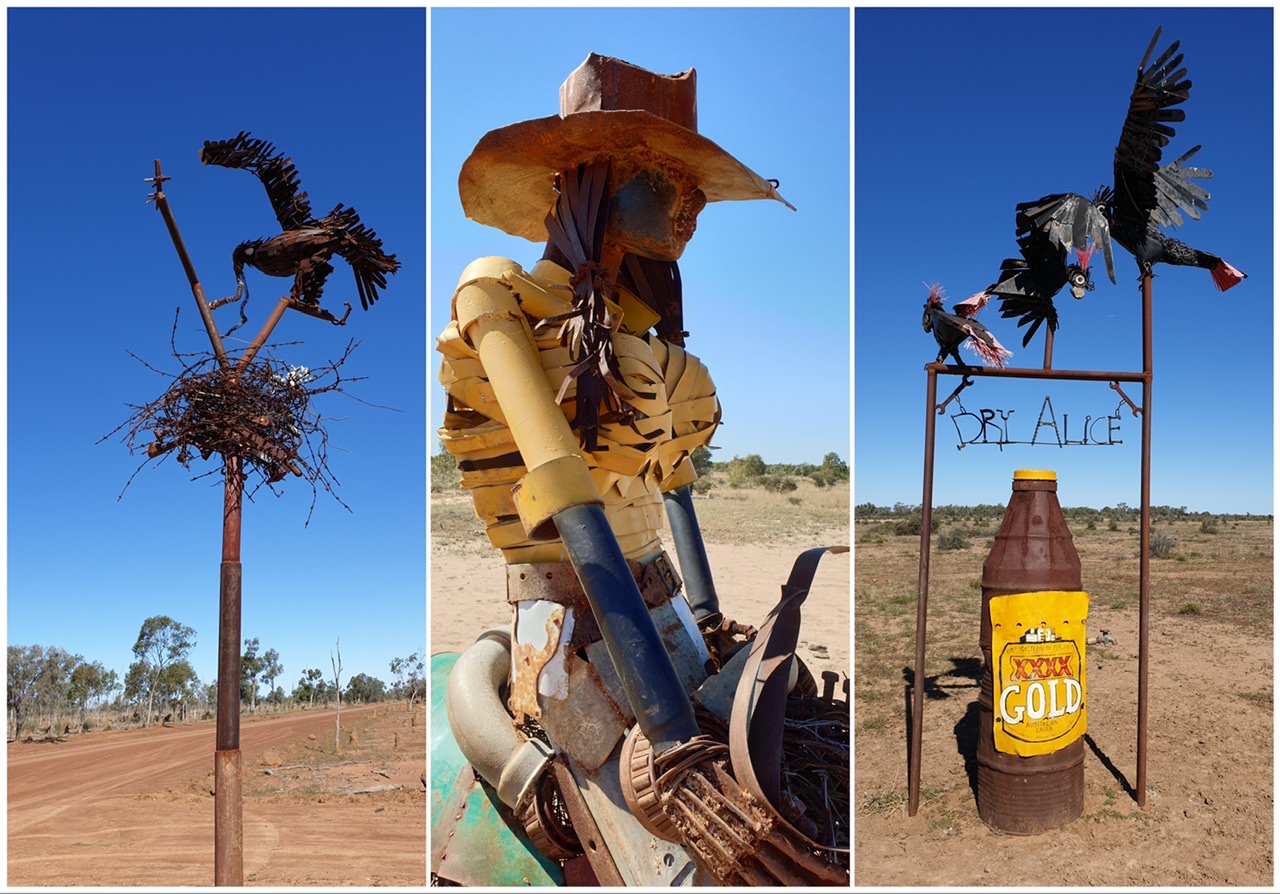 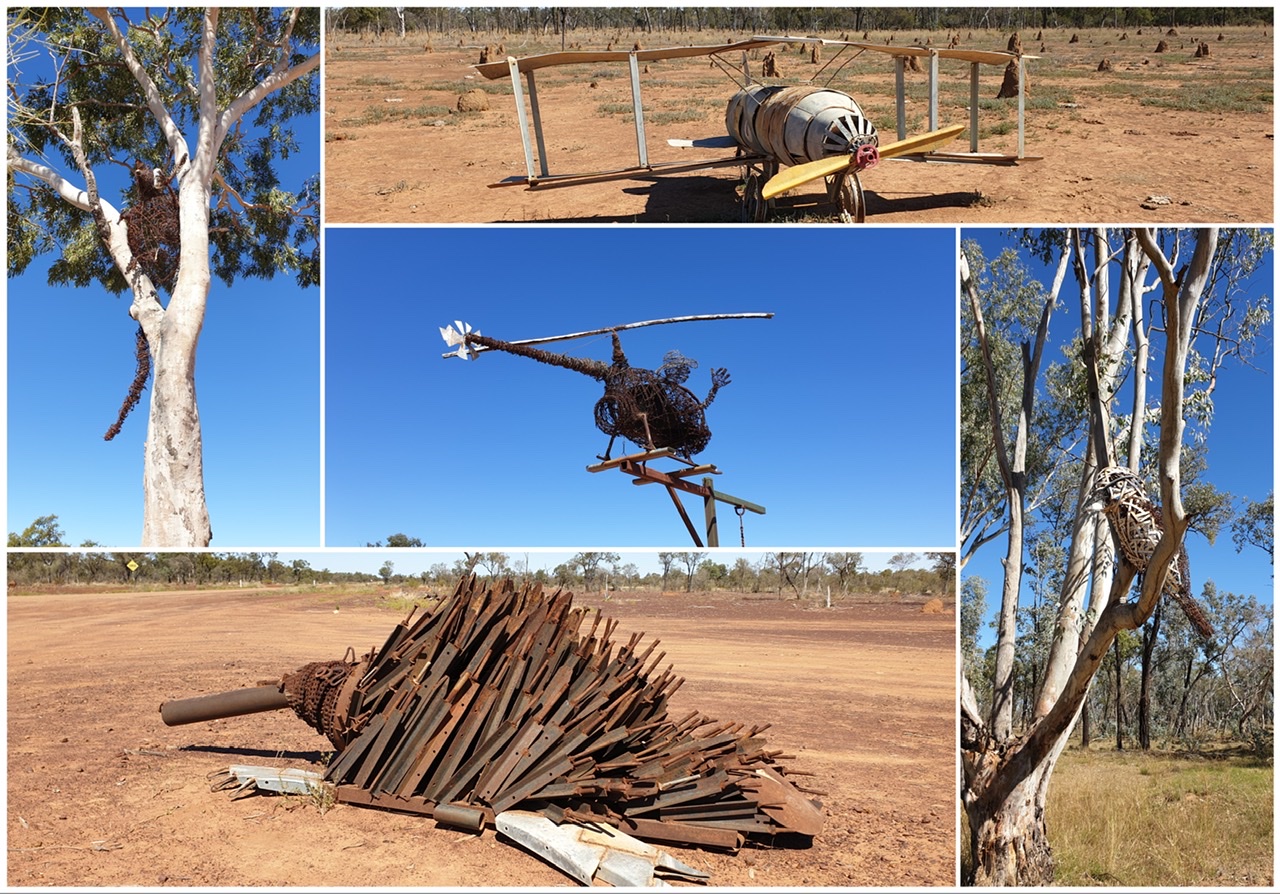 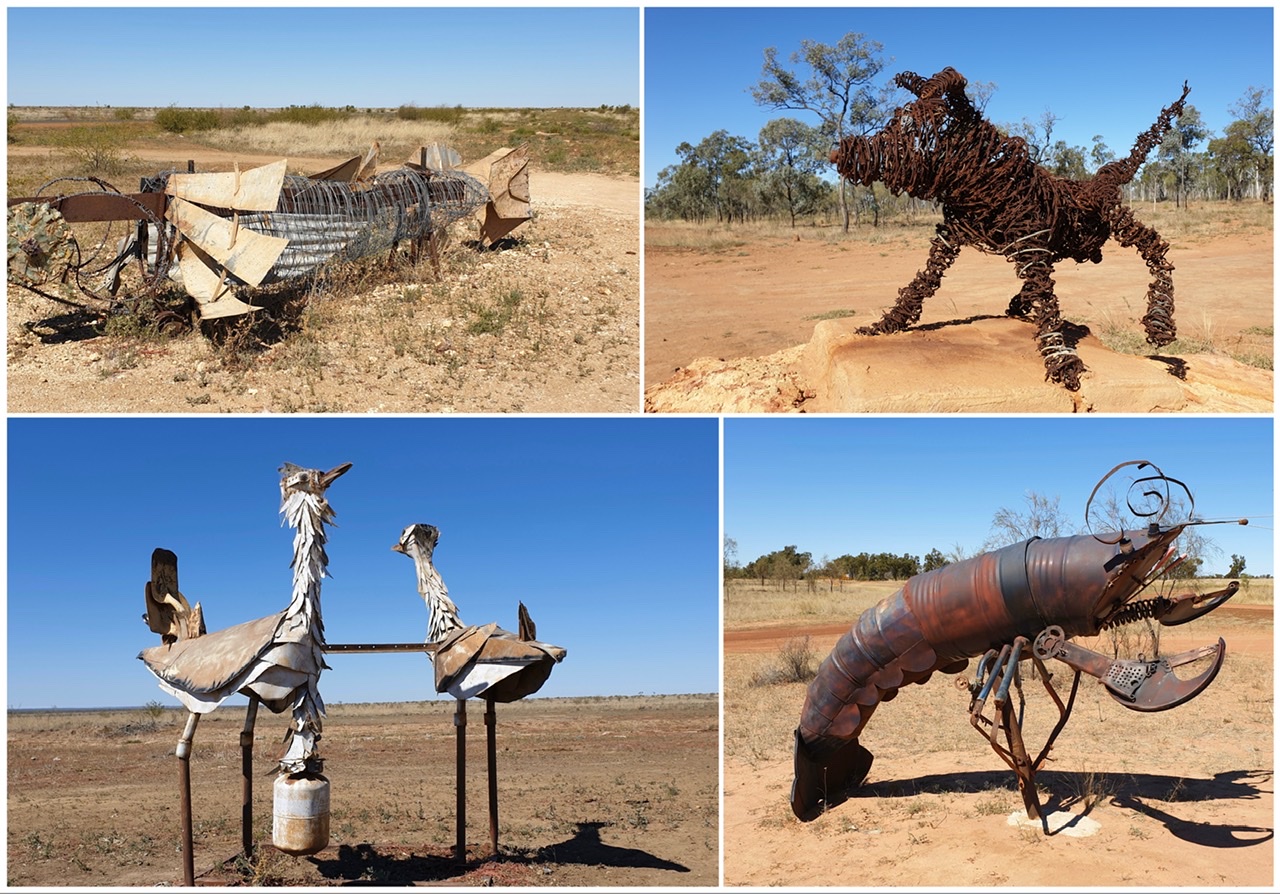 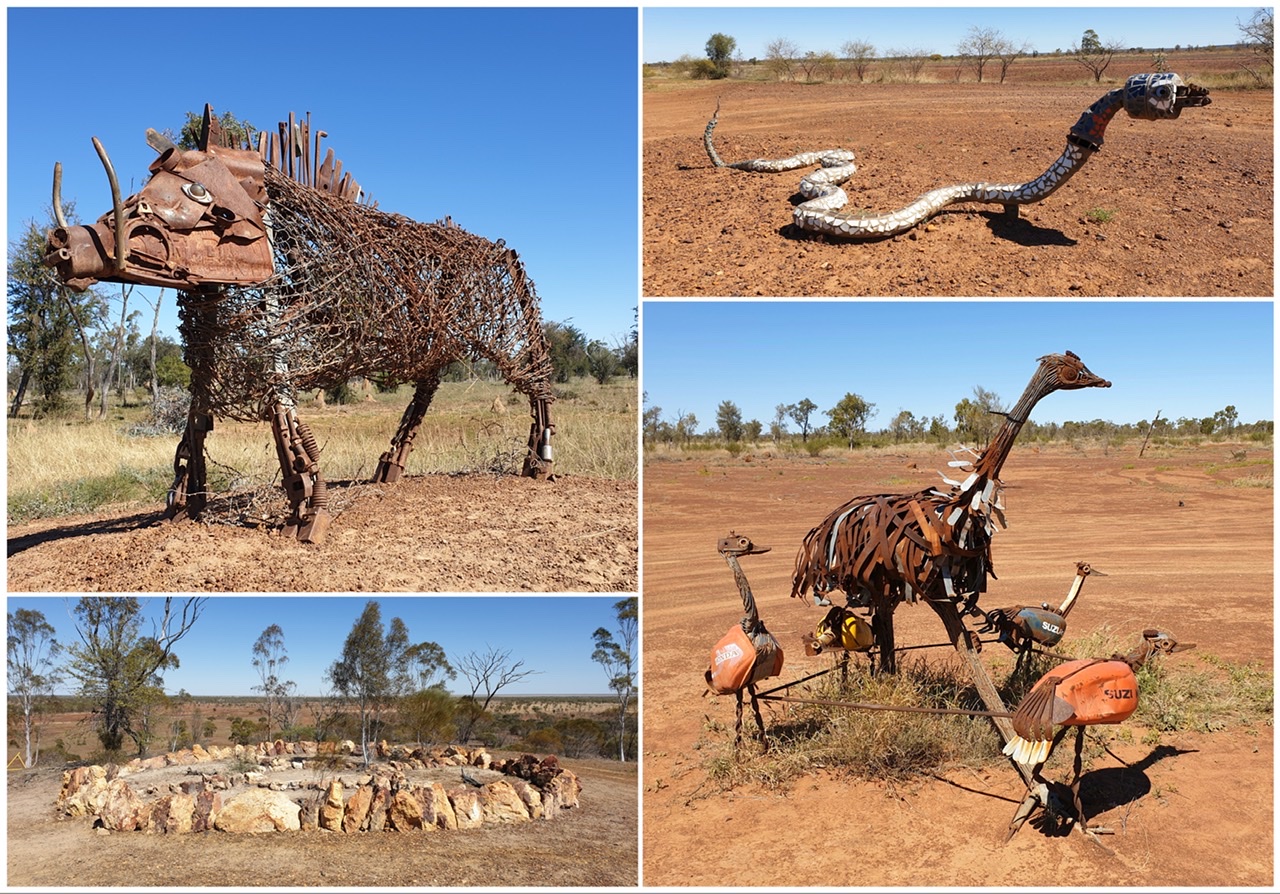 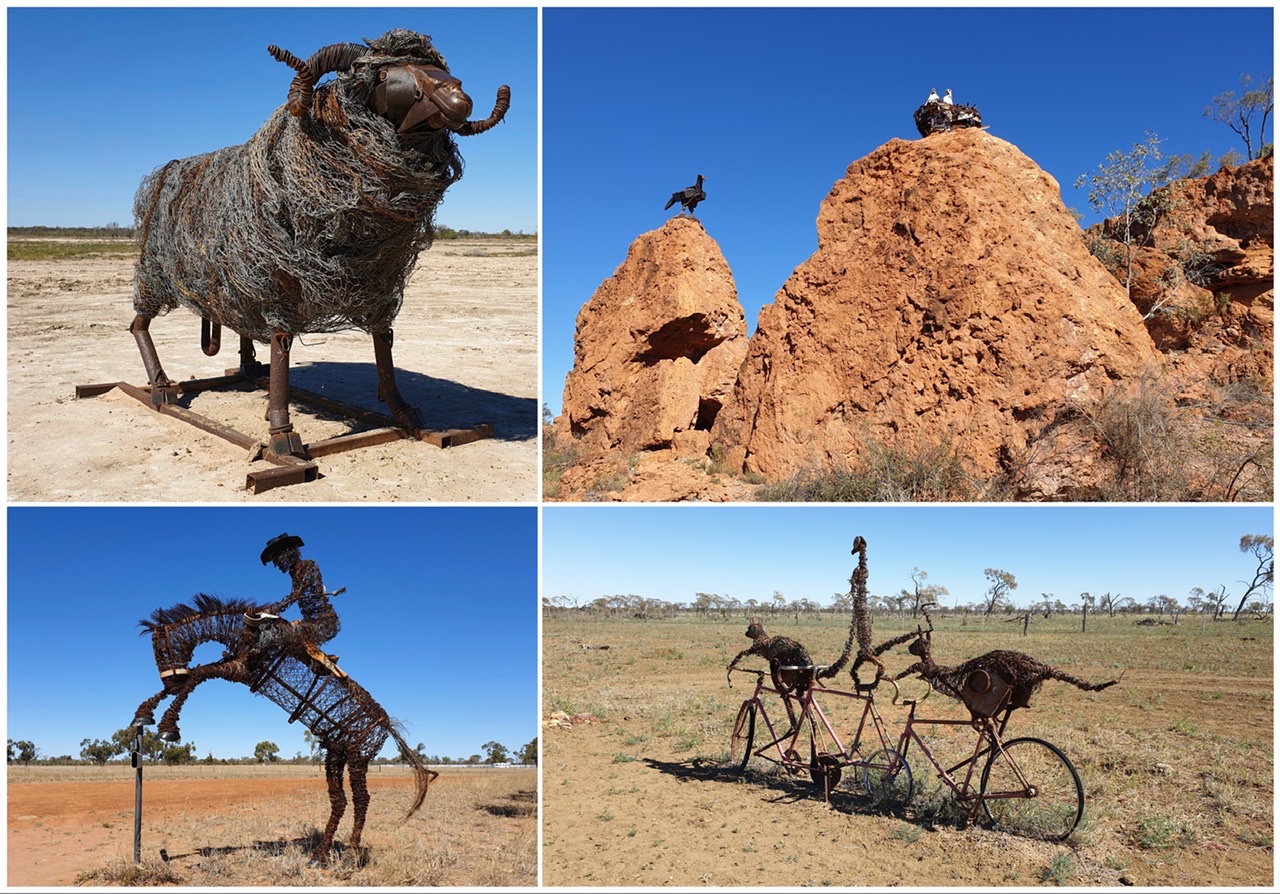 We were actually exhausted by the end of the day, very full day. We could have stayed the night at Lake Dunn and if we had taken the van along the trail with us we would have certainly stayed at least one night. Something to consider if doing the sculpture trail. 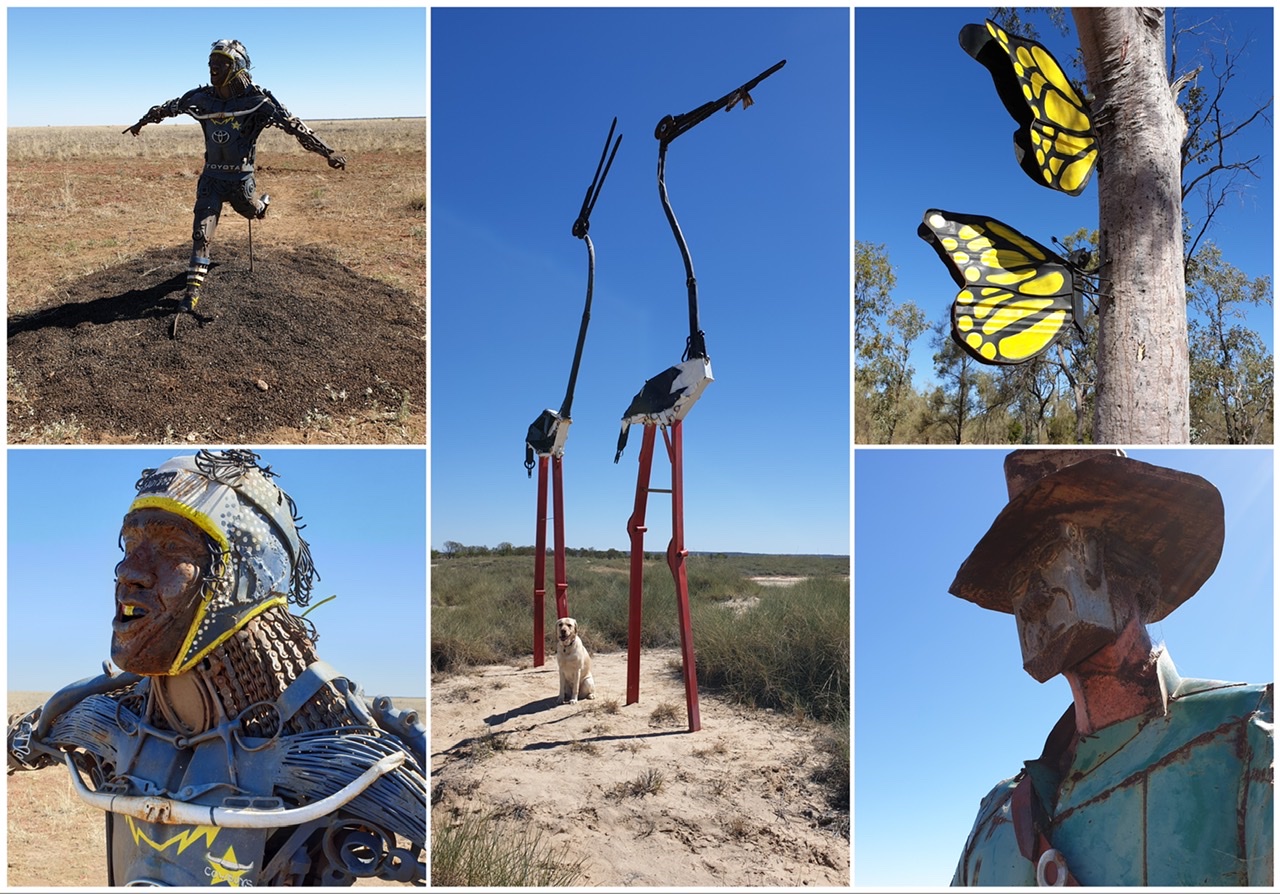 Lake Dunn is also another beaut place to stay. 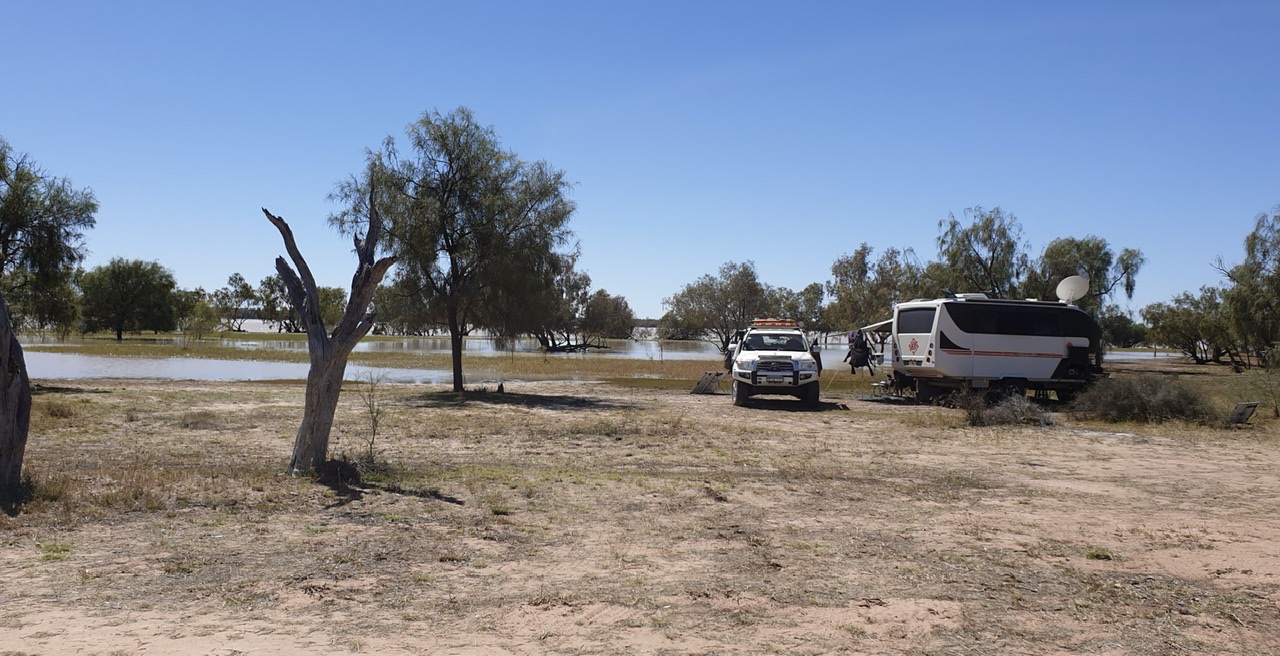 We also drove around the streets of Aramac tracking down all the Adorabulls. Before heading back to the free camp just out of town.