We have done quiet a few modifications to our Snowy. Some we had planned from the start to save money on getting them done at the time of build, some have come about just from using the van, making life easier. We have done a few modifications to different electrical aspects. It’s a good time to point out that Chris is an electrician so qualified to do the jobs. Others may need to seek a qualified electrician if working on 240v.

At time of build we had a 3rd battery box fitted, the van came standard with one AGM battery. We sold this and put in 3 x 120amp/hr Full River Batteries we already had.

Part and parcel of the change in batteries was a Victron Multiplus 120amp battery charger with 3000w pure zine wave inverter and the other relevant bits that go with this. This connects via Bluetooth to our phones where we can easily turn on the inverter, check battery status, usage etc. This is setup under the bed, behind a mesh to stop things bumping into it. The inverter is wired to the whole van which means every power point can be used via the inverter. Part of the decision in getting the Victron was that we knew we were going to add more solar and eventually change over to lithium batteries. A DC to DC charger was also installed.

The Victron Multiplus is quite unique in that it can run in a power assist mode where it can take a limited external supply and boost it from the batteries to run multiple appliances together. For example we could run the air conditioner and microwave together when supplied by a 1000w generator or even just from the batteries for a limited time.

We immediately got a StoneStomper, it was great at protecting the Aussie Swag so we knew it was a must to protect the Snowy.

The Jockey wheel was replaced with a Trail-A-Mate which can stay in place, with some wire and clips kit. Fortunately we still had one from a different van many years ago.

We changed the hitch over to Al-ko Off Road Pin Coupling with Click Lock Technology. Several reasons one it’s an easier hitch to hook up, second was for security as they are not as common as the standard ball coupling. This also meant a change in the handbrake. 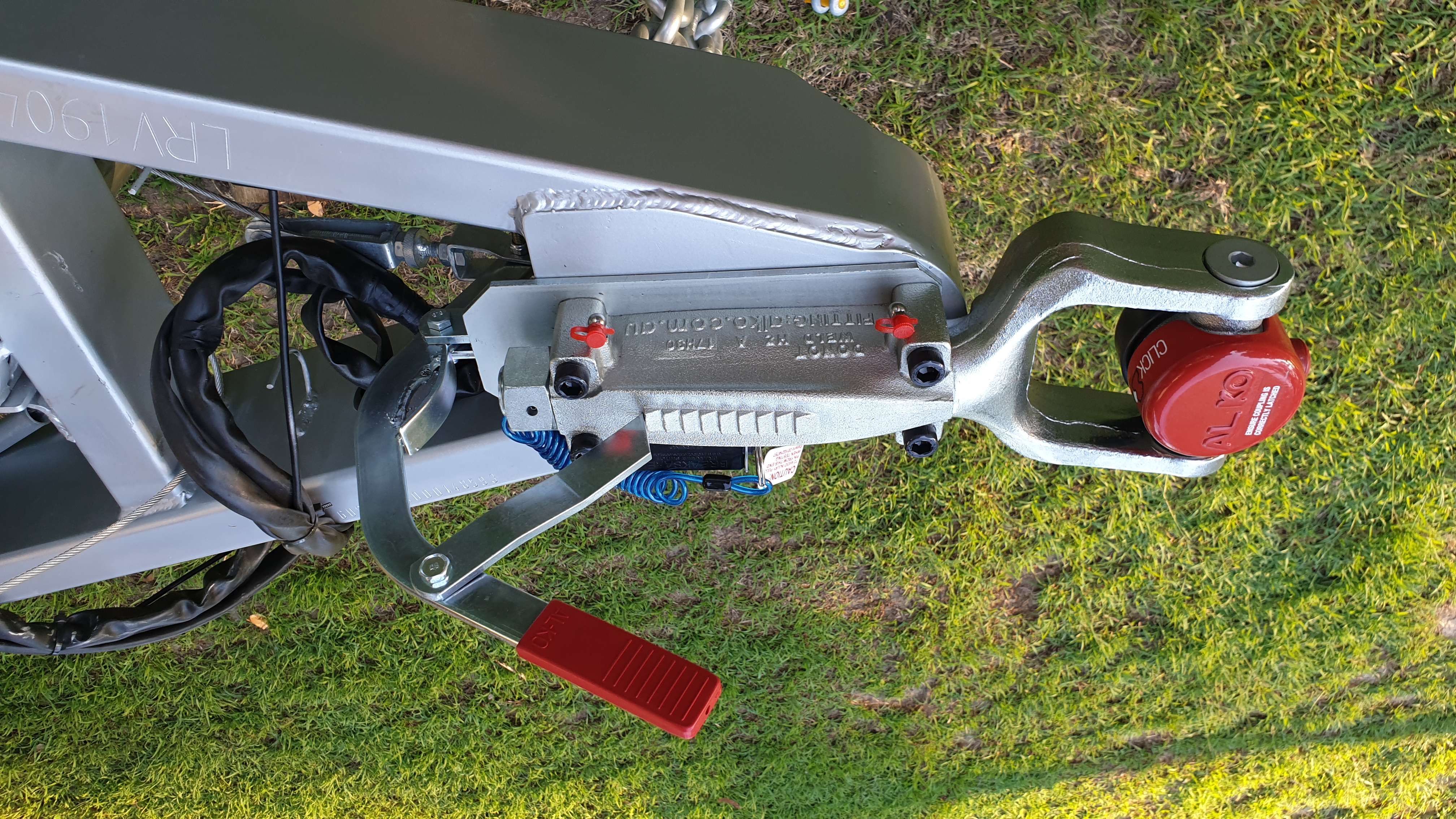 We put a roller blind on the door, standard at the time was a venetian blind which we elected not to have fitted. 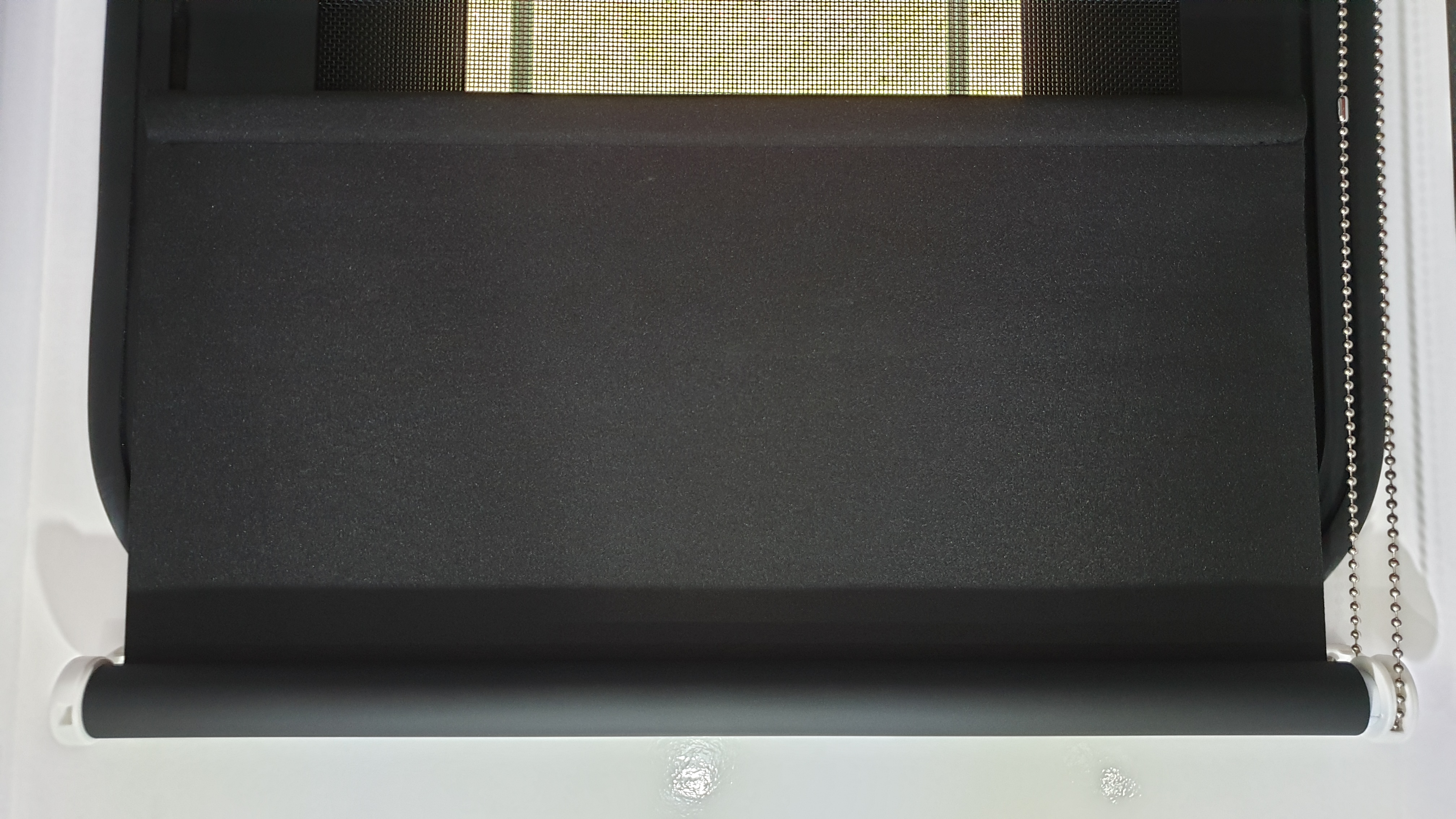 We decided to store all Jess’s bits, shoes and the vacuum at the cupboards near the door. Chris installed an extra power point to charge the vacuum.

We put up several extra towel rails, also a spot for the bath mat. Rail for the t/towel and then later a spot to put the tissues. 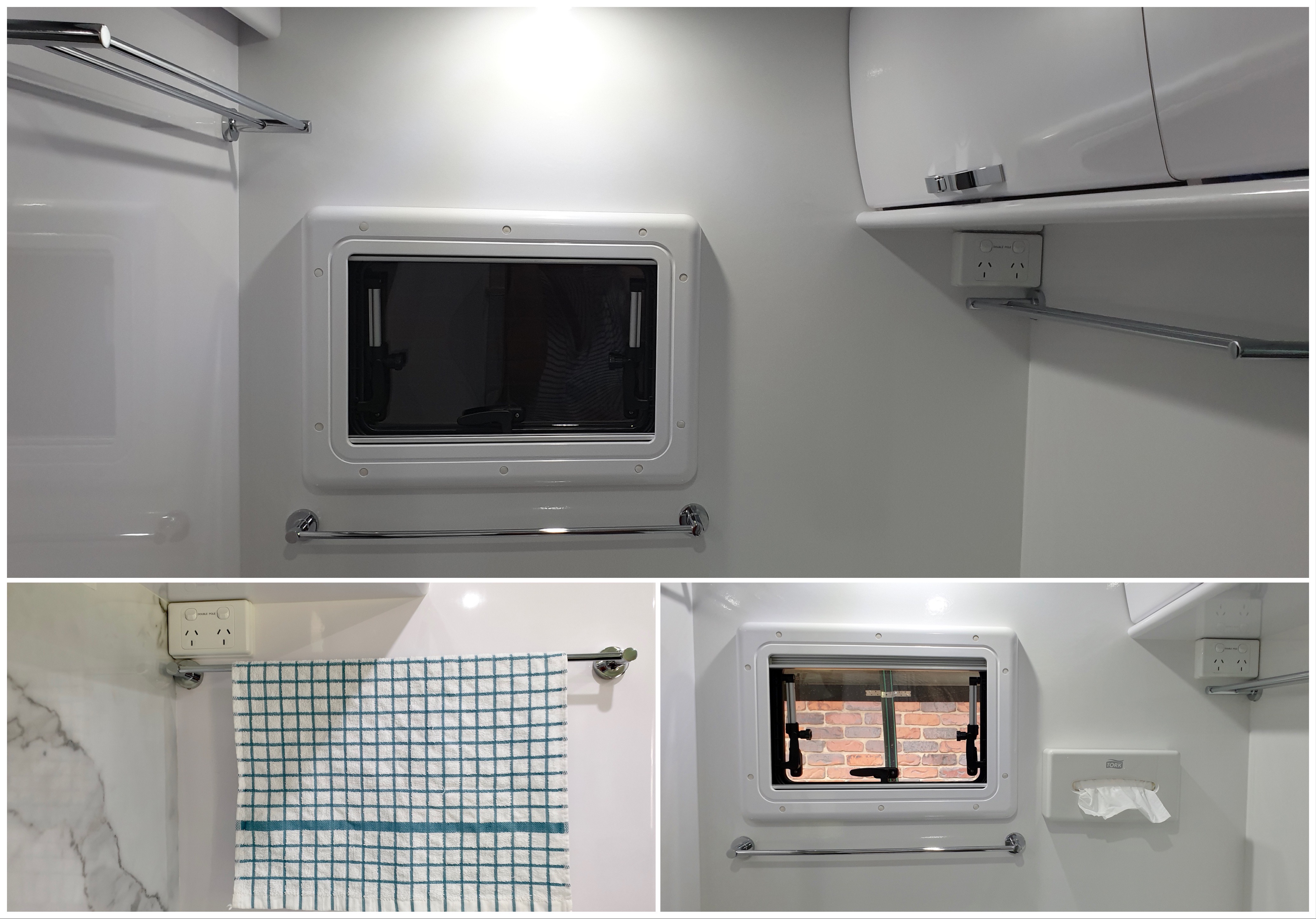 Shampoo, conditioner and soap dispenser in the shower area. Also a few hooks to hang things on.

Several very handy hooks for hats, and other bits.

A few others hooks and containers around the place to hold bits and bobs.

We have added shelves in most of the cupboards, creating lots of storage.

Replaced the microwave with one that was slightly more powerful, white so it didn’t show the fingerprints and Chris secured it with screws in from the bottom. Much more more secure. We plan to put an led strip light above the sink that will hide the screws 😃.

Kate made some magazine holders. Great to have a place to put tablets, and tourist brochures as well.

Also changed the fabric flip out foot rest to vinyl as we have a Labrador who likes to lean and they would get covered in dog hair.

Cel-fi Go that can be moved to either the van or the Ute. A small antenna is attached to one of the solar panels.

We found every time you washed your hands at the vanity basin it splashed water up on the mirror and we were constantly cleaning it. Kate bought some stick on tiles and tiled the bottom section. So much better, easy to clean and any splashes are not noticeable. Also gave a great spot to put the hand wash dispenser.

Put up a weather station, always handy to know what the temp is.

Carbon Monoxide sensor and alarm was also installed. And we changed the smoke dector to a photoelectric one with a lithium battery that will last 10yrs.

To stop the table leg bouncing and moving around we installed a clip to hold it securely in place. Works a treat.

Chris installed a grey water tank towards the rear of the van which meant moving one of the water tanks into the middle of the other 2 tanks keeping them all near the axels, much better spot.

2 x 50mm pvc pipes with bigger ends to hold the grey water hose which is cut into 2 with connection. Installed under the van, neat, tidy, out of the way and easy to get to.

Chris changed the way the van fills with water. The hose connects directly to the tap at the front with 3 solenoids, one for each tank simply flip a switch to fill each tank, much quicker.

Replaced the foam in the seat with high density foam we bought from Clark Rubber, much more supportive and comfortable.

A few switches got moved or changed. Chris changed the 4 switches near the door to a 6 way. This allowed for the pump switch to be moved there and to put the 2 external lights on different switches. The circuit breaker got moved to a more convenient neater spot and Chris added another circuit breaker both are used for the Victron battery charger/inverter.

We installed a Savvy Level that connect via Bluetooth to your phone which you can use in your vehicle to let you know when the van is level. Very handy particularly when free camping or using ramps.

Bike rack installed on the front of the van. We elected to put them there so we could keep an eye on them from the rear camera on the Ute and felt they would be more protected and less dusty than on the back. 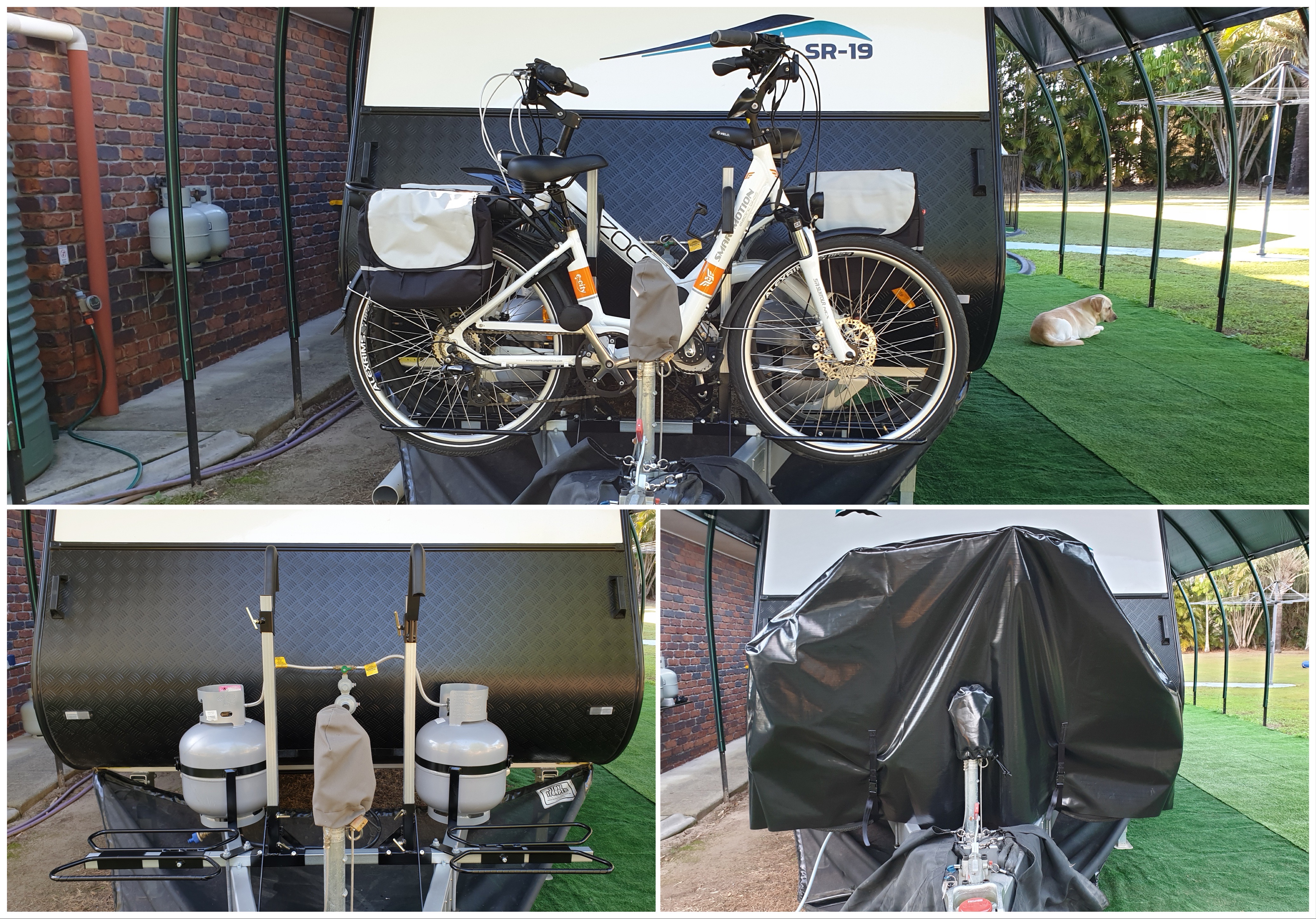 2 Jerry can holders installed on the back bumper between the van and bumper to keep them safer. One either side of the spares. The bumper had been upgraded to hold the extra weight at time of build.

One of the shelves in the small pull out pantry broke, we weren’t actually expecting this to last long. We changed the hinges on the door to allow it to open up enough to have 3 slide out drawers. Works a treat for us.

5 x 180w Alvolta Solar panels have been installed on the roof of our SR19. We used this configuration as this is what fitted and offered the best bang for buck. These solar panels are sold by a reputable solar dealer (Springers) and not cheap ebay ones. Chris made 2 part brackets, one part with a specialised activator and silkaflex 252 were glued to the top of the roof, so no drilling holes. The second part were riveted onto the solar panels then the 2 parts screwed together. They also sit slightly higher than the old panel to allow better airflow and cleaning underneath. 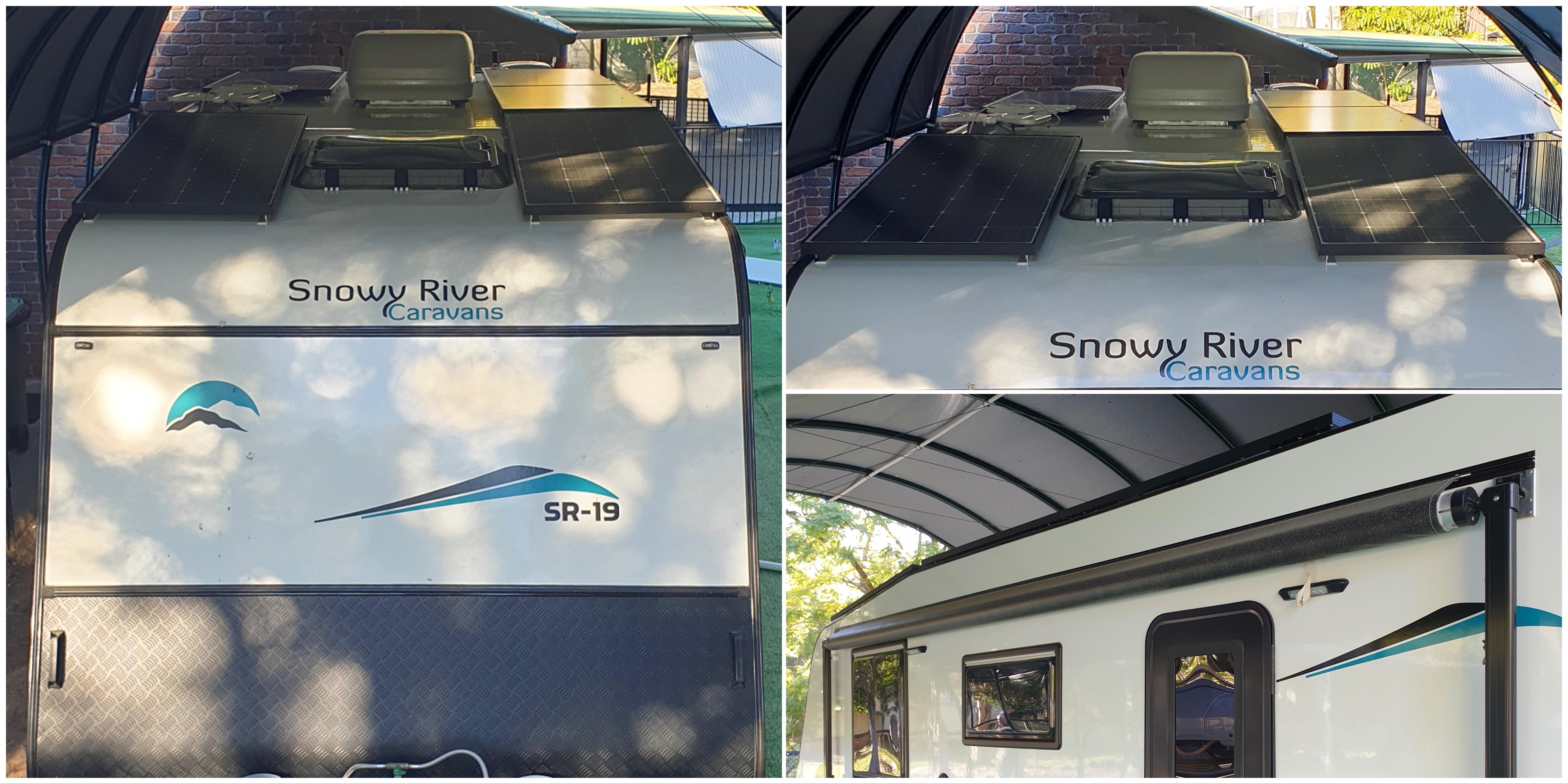 3 panels down the annex side and 2 along the other side. The wiring for the 3 solar panels went down the same hole as the old wiring, so no news holes made. Chris used a mounting block over the hole for the wires and silkafelx so everything is kept safe and dry. With the other 2 panels Chris made a hole in the roof (again using the mounting block) and the wiring for the panels went down behind the fridge, through the cupboard under the fridge through the floor and up under the bed where the solar controllers are.

2 x Victron SmartSolar 100/30 MPPT solar charge controllers, replace the existing solar controller which are installed under the bed with the Multiplus battery charger/inverter as they are larger and do not fit where the old controller was. These also have Bluetooth connection so we can see battery voltage, solar history, load output, flexible battery charge algorithms and more and fits in nicely with the Victron Multiplus.

We have not installed a heater of any kind, opting to have more solar and battery power that can be used all year round and use electric blankets and a small ceramic heater when needed.

TV has temporarily been replaced with an old Teac we had. We plan on changing the TV bracket to allow more movement and getting a better TV.

After owning  the Snowy for 12 months we gave our opinion on what we thought about it, Warts and All happy to say we are very happy with it and with all these mods just about makes it the perfect van for us. 😁

Jobs still to be done:

A clothes line on the awning.

A slide for the side boot which will hold the BBQ.

Led strip lights one above the sink other above the vanity.

Small tablet up in the cupboard Bluetooth to chargers/inverters so easy access to solar and battery information.

A positive pressure setup in the van to stop any dust.