We had a nice quiet night last night all by ourselves. We drove the 100km straight into William Creek as there wasn’t anything to see on the way. We arrived about morning tea time, Chris filled the car with very expensive petrol, $1.85.9. We then had a quick cuppa, unhooked the van, checked we were all booked in for tomorrow’s morning flight, paid and then drove out to Lake Eyre. There is a booth to pay for a day Parks Pass at $8 a few km’s down the road. The road either side of William Creek is quite corrugated, and the 69km out to Lake Eyre is mostly corrugated with some rough mud patches.

The closer we got to Lake Eyre the more desolate the landscape became, at one point there was just small black rocks for as far as the eye could see, and no vegetation, it looked like a bomb had gone off in the place. It stayed this way all the way to ABC Bay. There was nothing much to see at ABC, black rocks and a muddy looking lake with bits of white patches of salt. Further out you could see big white patches of salt. There were no flies there because it was blowing a gale and was freezing.

From there you drive another 10km to Halligan’s Bay. As we drove towards Halligan’s Bay the ground became sandy and there was a bit more vegetation. At one point the road runs right along the lakes edge. At Halligan’s there are toilets, a shelter shed, and a camp area, which was an area just fenced off from the rest of the sand and rather small. We saw a lonely Plubber that let us get very close for some photos, there is the bird migration, not really. You walk down a sand embankment towards the lake, from there we could see off into the distance the salt flats. We didn’t see any water, but did see some reflections but can’t really say what caused them.

We walked out to the salt flats, the further you go out the wetter the ground became. It we stopped we would start to sink into the salty, sandy mud. We could see the indentations where others had walked. Salt had crusted over some of them, making quite fascinating patterns. In some other places salt had formed around the edges and then it had filled with clear salty water. In was a nice thought to think ours foot prints would leave the same fascinating patterns for others to see. As the saying goes take nothing but photographs and leave nothing but footprints. Once we got onto the salt flats the ground became firmer, it was awesome to be standing there on the salt flats of Lake Eyre. The salt had formed many intricate patterns it was different with every step you took. It was quite crystallized in places, we broke the salt surface where we were and it was nearly a centimetre thick, it would be thicker further out. The sky was very overcast and stormy, which just added to then eeriness of Lake Eyre. Also gave us some concern as to whether it was going to rain. Out on the lake there were no flies as it was rather windy. Once we back at the car park the flies swarmed us again. We had our lunch in the car away from the flies and wind.

We hooked the van back up, drove back out of town a short distance towards Oodnadatta, saw a car wreck in off the road and have stopped next to it for the night. It is quite open, as is everywhere around William Creek, so it is howling, we hope the wind dies down for the night.We went back into William Creek, filled up with fuel again and went in to check out the William Creek Hotel which is the only shop in town, and has the only fuel pump. The pub is full of memorabilia if that’s what you call it. The walls, doors, window frames, ceiling and any spot you can stick something to and write on is filled, with business cards, old drivers licence, student ID’s, undies, g stings, bras, all forms of underwear, t/shirts, hats, x-rays, pictures, letters, newspaper articles, if you could write on it, wear it, read it, it was on the wall, anything goes at this place. You could spend hours and hours reading it all. Things were hanging down from the roof, there was literally no space left anywhere, and in some places things went back 4 or 5 deep. 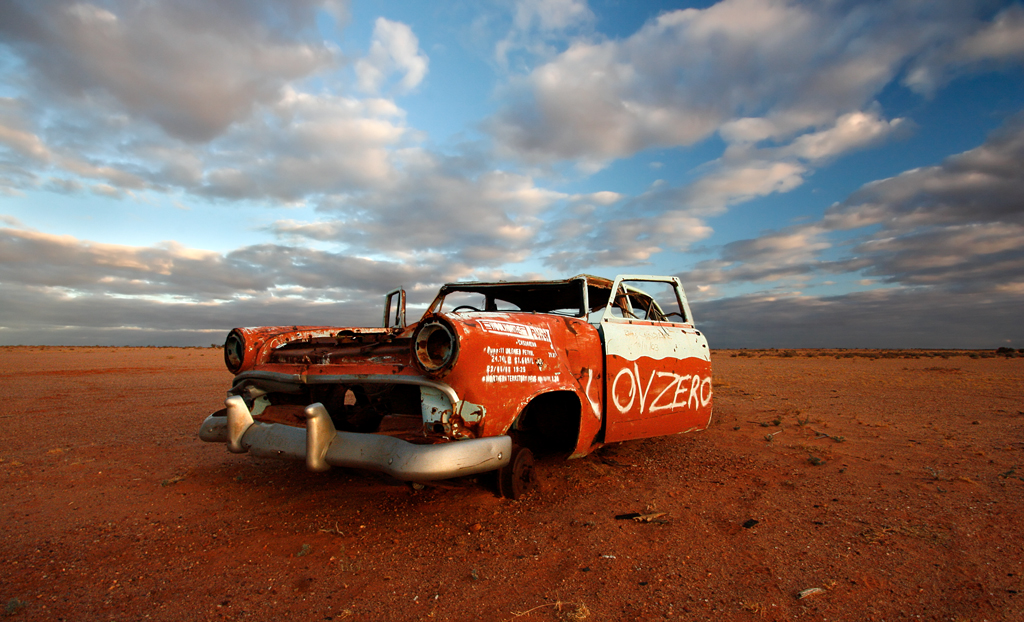 It’s been great being here, something everyone should see and experience at some point in their lives, it’s very hard to describe in words what we see, how annoying the flies, wind, dust, and dryness can be. It is an experience, and an eye opener, it gives a real appreciated to the pioneers of this land, the huge difficulties they must have experienced. We keep wondering why people would choose to live out here, we are really pleased we have done this trip and would recommend it to anyone, at the same time we are ready to on and leave the wind and flies behind.