Burdekin Falls Dam, Chris has been very keen to take a drive out to the dam. We have crossed the bridge over the Burdekin River several times over the years and it is a massive river.

The road from Collinsville turns to gravel as soon as you turn off the main road.  It was very dusty and the Carafan was turned on for the first time. Worked a treat no dust in the van.

We stopped at the Bowen River just before the Bowen River Hotel for morning tea. The river was flowing and crystal clear. We had a quick paddle to wash the dust off our feet. You do have to be croc aware. In the photo below you can see the old and the new bridge. 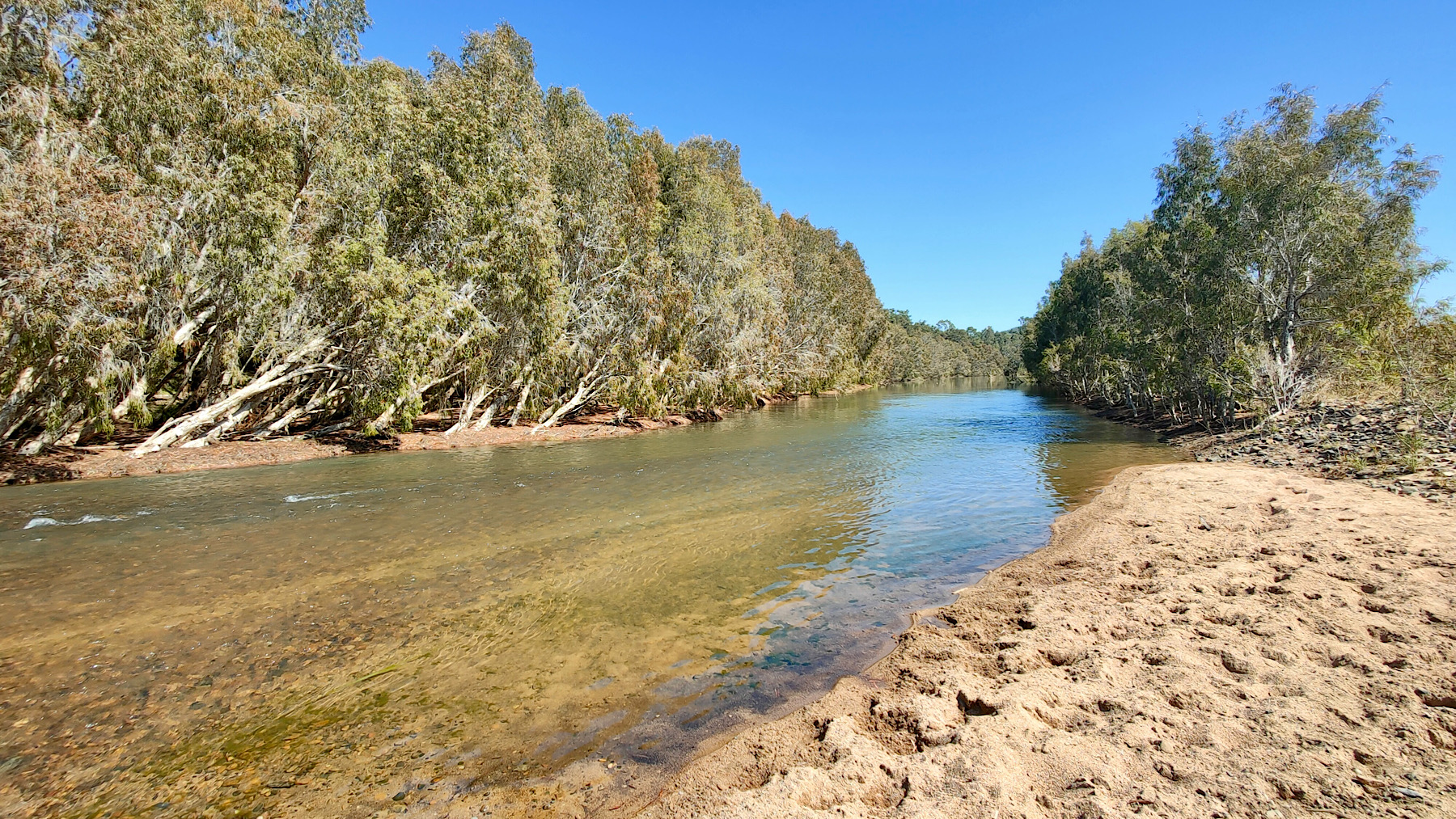 We decided to let some air out of the van tyres for a smoother ride. Truck was going fine.

The road was a bit rough in places especially dips, floodways, causeways, cattle grids with rough entry in and out. We were warned they were doing road works on the road with up to 9 road trains carting gravel and a grader on the road. We had 3 trucks pass us when we stopped for morning tea and lunch and only came across the grader and the road works towards the end very close to the dam.

It is a bit scary crossing the road below the dam knowing a whole heap of water is on the other side of that wall. Seeing the river below with loads of water birds, all an amazing site.

Our plan was just to stay one night but the place really had a lovely relaxing feel. Clean amenities with plenty of hot water at the showers, water taps at each site, concrete slabs and green grass. Cost is $7 pp/pn unpowered and if you want power another $5 per site. Can’t get much better than that. Payment is made via credit card at the machine down near the info centre. You can also pay cash but that is a littler dearer at $8 each.

So we decided 2 days straight up and extended that to 3 nights. Lots of water and no issues in hosing down the van and truck that was covered in dust, but non in the van or in the truck. We don’t have a boat or into fishing but we can still appreciate the magnitude of the dam, the engineer and work that went into it. Lots of peacocks and peahens around the camp site, we counted at least 20. And several walking tracks to explore the remnants of the old town.

The Burdekin Falls Dam is one of the largest dams in Queensland. The dam forms Lake Dalrymple which covers and area of 22,400 hectares and ponds water 50km up the Burdekin River. The design of the dam has allowed for future increase in storage capacity and for possible future hydro-electric generation. We have heard since we have been here that approval and funds have been given for the increase in storage capacity.

Construction of the Burdekin Falls Dam commenced in 1984. It was completed in 1987 and filled the following wet season in 1988. There were homes, a school, shops much larger caravan park a small town for the workers and their families. As you walk around you can see old concrete slabs hidden in the long grass and bushes. The old tennis court still stands. What is scary is the years this dam was being constructed Chris and I were married in 1985, a town was built and now we see the remnants of that town that once was all gone. Gee makes us feel old.

It is worth walking down the concrete paths to the viewing platform that offers views of the dam, wall and the river below. At sunset you are greeted with the sun setting over the dam and a golden glow over the water. The is also a small information room with loads of photos and information about the construction of the dam.

The road we had come in on was closed and the dam closed to boating due to water going over the spill way and onto the road below. It had been closed for many weeks. The last few days before it open Chris was watching the level over, 20mm, 10mm, finally none. In 1991 the dam level was 6.85m over the spillway. Wow seeing this is flood would be an awesome sight.