“Your great Outback escape awaits you. Deep in the heart of wild and isolated country you will find the frontier town of Birdsville. Situated between the eastern edge of the Simpson Desert, the vast gibber plains of the Sturt Stony Desert to the south and rich in Channel Country to the north. It was once a notorious place through which cattle drivers moved their stock. Now Birdsville is a thriving modern community” taken from several tourist brochures.

Some may not call it modern but after being in the desert for 10 days and nights Birdsville actually did feel like the big smoke. We did a big clean up and resorted and shuffled bits between trailer and Ute again. Nice to have the simple usability of the trailer once more. After lunch we filled fuel and water and let the van park know we had picked up the trailer the night before. Today was very much a sorting out day.

Birdsville is filling up. There is a Big Red Run from Birdsville out to the Simpson, from the 24th to the 29th. The Big Red Run course comprises a mixture of sand dunes, open gibber plains, clay flats, salt lakes and a few station tracks. 250km over multiple days. You can check out the course map here and more info about the race if you are interested in doing the race in 2018.

We had completed the Simmo in shorter time than we had allowed which we had hoped to do allowing for hold ups etc but still making sure we felt we had plenty of time exploring and enjoying the Simmo. This allowed us a few extra days to do the long slow trip home via Bedourie, Diamantina National Park, Blackall and where else we felt like exploring on our way home.

The road to Bedourie known as the Bilby Way is very flat with lots of open spaces, not a lot of vegetation. Pretty good gravel road with lots of areas with bitumen. Approximately 12 kms from Birdsville you come across the Waddi Trees. Some of these trees are almost a thousand years old. Apparently the timber is almost impossible to burn and it is so hard it can damage an axe.

Someone does have a sense of humour. I’ll let the photos show the interesting sites we saw along the way.

81km’s from Birdsville is the Carcoory Homestead Ruins. It is all that is left of one of the first properties owned by Sir Sidney Kidman. 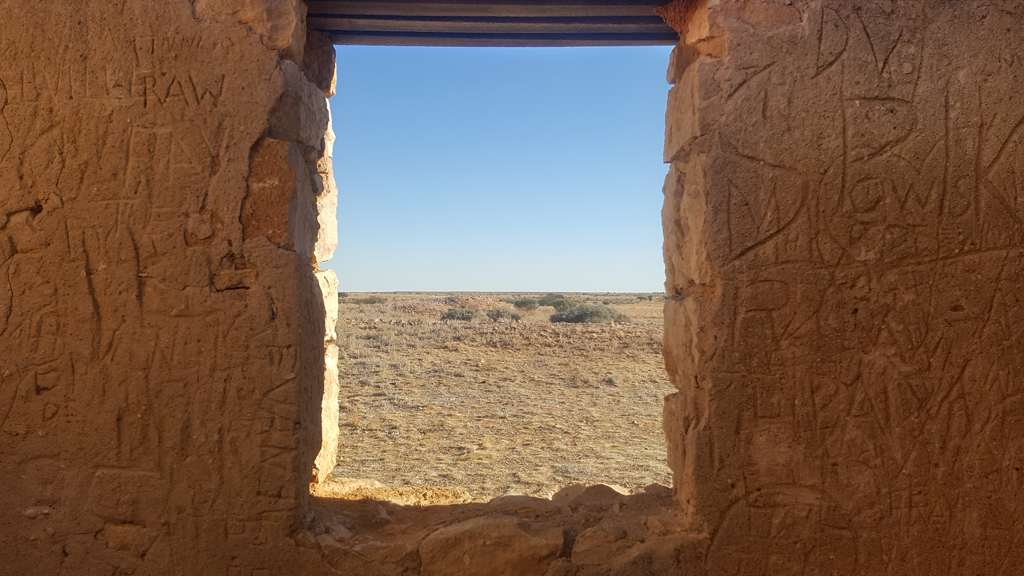 We stopped for the night at Cuttaburra Crossing 68 kms from Bedourie on the Eyre Developmental Road. There is a toilet and dump point. A gravel area where you first come in next to the river. Several caravans were camped there. 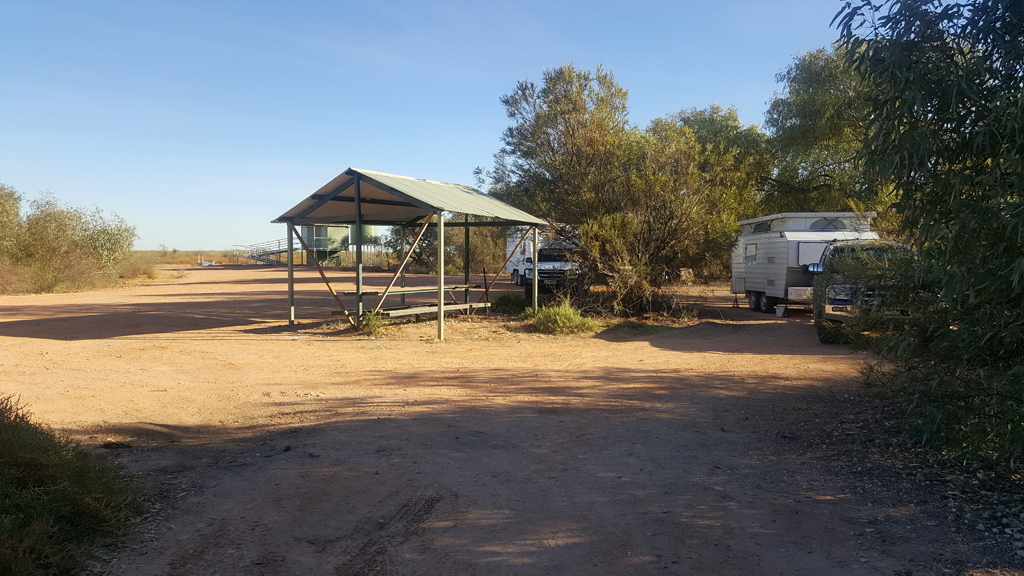 There was a track leading off following the river which we took. There is a bird hide tucked away amongst the trees. Loads of birdlife and fish jumping in the muddy water. Several cleared areas to camp along the track. A camper van was in one spot.

We snagged a good hidden spot amongst some trees next to the river. Sort of place you could stay a few days if you had the time.